Why This Abortion Survivor Had to Thank President Trump 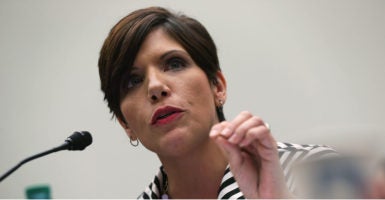 "I was there for all of the survivors that I work with, who are so grateful for President Trump," says abortion survivor Melissa Ohden, pictured giving congressional testimony in 2015. (Photo: Alex Wong/Getty Images)

At age 14, Melissa Ohden learned that her biological mother was forced to have a saline abortion, one that she defied the odds by surviving despite being in the womb only an estimated 31 weeks.

Years later, a nurse who cared for her in the NICU told Ohden: “A tall blond nurse rushed me in, and she shouted, ‘That darned [abortion doctor] messed up. She just kept gasping for breath, and I couldn’t just leave her there to die.’”

Even more incredible, Ohden, who had been “gasping for breath” but is now 41, says she survived an ordeal that lasted five days instead of the usual 72 hours for that type of procedure in 1977.

An unborn baby normally “would soak in that toxic salt solution being poisoned and scalded, and then they would induce labor to expel that deceased child from the womb,” Ohden says in an interview with The Daily Signal.

“Through my medical records, we actually have learned that I soaked in that toxic salt solution not for three days, but five,” she says, adding:

They kept trying over that five-day period to induce my birth mother’s labor. I often joke I’m a little stubborn; I was just not willing to budge. But finally on that fifth day, they succeeded, induced her labor, and they were of course very surprised when I was born alive.

Ohden, who later was adopted, says she has spent the past 12 years speaking out to share her story and connect with others who had similar experiences.

“I’ve never intended to live this public life as a survivor,” she says. “But I have learned that that’s my purpose.”

She met last week with President Donald Trump in the Oval Office.

Ohden recalls in the interview with The Daily Signal:

It was our opportunity to share our stories with the president, to help him understand the impact that late-term abortion has had on our lives, and really for each of us to thank him for his commitment. … I shook his hand and said, ‘On behalf of the 269 survivors that I’ve connected with, through my work, I want to thank you for your commitment and all that you do for life.’

And I meant that. I wasn’t there for myself that day, I was there for all of the survivors that I work with, who are so grateful for President Trump and all that he’s doing, and for those children who are going to lose their lives to abortion.

Ohden says she is troubled by the recent debate over infanticide and failed Senate votes to provide medical care to abortion survivors, especially when she is just one of many with a similar story:

It’s really interesting that the Democrats are introducing this really aggressive legislation [to allow abortion] through the third trimester, yet at the same time wanting to delete the protection for children like me that survive abortions. The more they introduce this kind of legislation, the greater the likelihood it’s going to be that children like me survive.

“And so we desperately need that Born-Alive Survivors Protection Act to ensure that we’re provided medical care,” Ohden says, using “we” to put herself in the company of all abortion survivors.

The legislation would insure that babies who survive abortions are given the medical care needed to survive. A roll call vote in the Senate is set for Monday.

“This is a human rights issue, this is not an affront to Roe v. Wade,” she says, referring to the 1973 Supreme Court decision legalizing abortion across the nation. “I’m just simply asking for people to see the dignity of our lives, and provide us the same medical care that any child should be afforded.”

As for her biological family, Ohden has reconnected slowly with several members, including her biological mother, who found out that she spent nearly 30 years believing her child had been aborted.

By coincidence, Ohden and her family moved to Kansas City, Missouri, where her biological mother lives.

“When I say she’s a part of my life, I mean she’s really a part of my life. I was just at a birthday party with her a couple of weeks ago. We were just texting back-and-forth last night about school cancellations, because we had a snowstorm.”

Ohden says her biological father died over 10 years ago.

Biological cousins and a grandfather told her that her grandmother “forced” her mother to get the abortion, she says.

She says her own experience as a mother makes her even more grateful to be alive—and to use her voice to speak out.

“I’m a mother of two young daughters, and one of my oldest was actually born at the same hospital where my life was supposed to end,” Ohden says. “[I] do the work that I do not only because I believe every child deserves that opportunity to live, but because I see firsthand the impact that abortion has on all of us, and for generations to come.”

“My children never would have lived if that abortion would have succeeded in ending my life, and so that motivates me to do the work that I do in this world.”