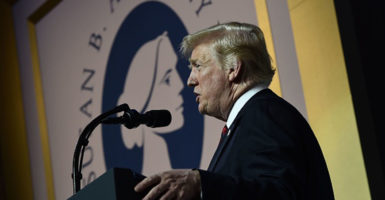 President Donald Trump met with a survivor of an attempted abortion, now in her 40s, as well as a young boy who survived when born just over 20 weeks of pregnancy.

Trump’s conference with pro-life activists Thursday comes after Virginia Gov. Ralph Northam suggested that unwanted children can be terminated shortly after birth and New York Gov. Andrew Cuomo signed a state law to allow abortion up to the time of birth.

Melissa Ohden survived an abortion attempt in Iowa in 1977, and spoke at the March for Life in 2018.

“Although there were demands made to leave me to die in that hospital room that day,” she said at the event held in Washington that January, “ultimately a nurse rushed me off to the NICU [Neonatal Intensive Care Unit], because, in her words, I ‘just kept gasping for breath,’ and she couldn’t just leave me there to die.”

Trump also met Micah Pickering, born 22 weeks into a pregnancy, who became a face of the late-term abortion debate, as Congress attempted to ban abortions after 20 weeks of pregnancy.

Pickering’s mom, Danielle Pickering, told The Daily Signal in 2017, “On the issue of late-term abortion … look at that baby. That is fully formed. You know, that baby has a heartbeat, that baby has a brain, and kicks, and does hiccups … and is just ready for this world.”

Other pro-life groups in the meeting included the Susan B. Anthony List and the National Right to Life Committee.