She Survived a Saline Abortion. Here’s Her Story. 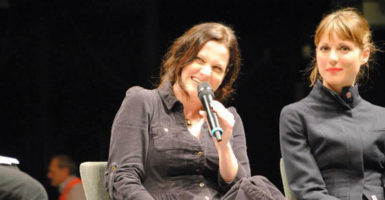 "I was being literally burned alive in my mother’s womb for 18 hours," says Gianna Jessen, left, an abortion survivor who is intent on telling her story. (Photo: Gianna Jessen/Facebook)

When Gianna Jessen had been in her mother’s womb for 29-and-a-half weeks and weighed less than 3 pounds, she was born despite a saline abortion. She has the medical records to prove it.

“Instead of dying, I was actually born in an abortion clinic in Los Angeles,” Jessen tells The Daily Signal in a phone interview.

Now 41, Jessen recalls how her biological mother walked into a Planned Parenthood clinic one day, where staff told her she needed to abort her child. She credits her faith for getting her through the traumatic ordeal.

“Saved by the power of Jesus Christ,” she says. “I am unashamedly a Christian, will not change that part of my story. I have no need to be embarrassed by that. … Now get this … no resuscitation required upon arrival at the hospital.”

But as a result of the loss of oxygen to her brain, she explains, she contracted cerebral palsy.

“I was being literally burned alive in my mother’s womb for 18 hours. I should be blind, burned, and dead,” she says.

An increasing number of scientists and doctors say babies can begin to feel pain during the mother’s third trimester, which starts around the 27-week mark.

Because Jessen was born early in the morning, around 6 a.m., the abortion doctor was not in yet. A nurse called an ambulance to transport the baby to the hospital.

“Had [the doctor] been there, he would have ended my life with strangulation, suffocation, or leaving me to die without a thought,” Jessen says.

One neonatologist told her that she “experienced, in the womb, the highest level of physical and emotional trauma that is possible.”

But even in the face of the diagnosis of cerebral palsy, Jessen has spent her life proving doctors wrong. She finished two marathons by running on her toes for eight hours. She trains with a Navy medic six hours a week.

Today, she says her story is important, especially because of state legislation that critics contend would allow a mother to abort her child right up to the time of birth, such as a Virginia bill recently defended on a radio program by Gov. Ralph Northam, a Democrat.

“They said I would never hold up my head, I would never do anything,” Jessen says. “This is all so relevant to the argument because … what do we hear all the time? If the baby is disabled, you need to terminate the pregnancy. What did Governor Northam speak about? Fetal abnormalities.”

Jessen, who lives in Nashville, Tennessee, says she finds the current political debate over abortion deeply troubling, including the decision by some Democrats to block a bill sponsored by Sen. Ben Sasse, R-Neb., from passing unanimously earlier this month.

Sasse’s bill, called the Born-Alive Abortion Survivors Protection Act, would require that babies born alive after a botched abortion procedure be treated no differently by doctors than any other newborn.

“We’re having a debate about whether it is ethical to strangle a child, for the parent and the doctor to have a conversation while they, quote, keep the baby comfortable, [and] while they decide if they want to kill it or no,” Jessen says, referring to Northam’s words on the radio.

“If abortion is about women’s rights, then what were mine?” she says.

Jessen says her faith inspired her to meet her biological mother more than 10 years ago, and to forgive her.

“We all need the forgiveness of Jesus, and I offered my own because I’m not a victim and I’m a Christian.”

Now, Jessen travels the country, speaking out and sharing her story as an abortion survivor with audiences.

“No one can determine our destiny, except the Lord.”