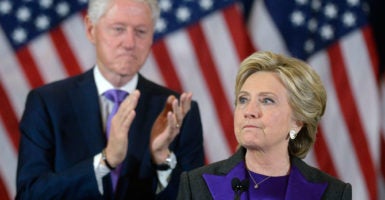 Hillary Clinton's campaign did not anticipate her loss in 2016. (Photo: CNP / Polaris/Newscom)

Chozick, a member of the largely female press corps that followed Clinton on a near-daily basis at times, crisscrossing the country with her, reported on Clinton’s 2008 campaign for The Wall Street Journal and her 2016 campaign for The New York Times. And in “Chasing Hillary: Ten Years, Two Presidential Campaigns, and One Intact Glass Ceiling,” Chozick talks about what it was really like.

I’ve assembled three of the revelations I found most interesting. But first, a couple of caveats: I’m not familiar with Chozick’s reporting for the Times, so all my assessments are based on a reading of the book itself. And secondly, Chelsea Clinton is already alleging Chozick got facts wrong, although Chozick is pushing back, noting her book was reviewed by a fact-checker.

For years, it’s been drummed into us that Clinton is a feminist icon. Even Chozick’s book title, with its mention of “one intact glass ceiling,” hypes Clinton’s status in women’s history.

But Clinton herself doesn’t come off as very feminist, or supportive of women, in Chozick’s account. She writes:

The thing about a mostly female press corps was that Hillary likes men, preferably the damaged, witty, brilliant kind. She told aides she knew women reporters would be harder on her. We’d be jealous and catty and more spiteful than men. We’d be impervious to her flirting.

Chozick also recounts that when she told Clinton staff that ABC’s David Muir, who Clinton was about to do an interview with, was rumored to be gay, a Clinton staffer said, “Shhhhh. Hillary can not know that.” (Emphasis in original.)

“For all the lesbian theories, Hillary enjoys nothing more than flirting with a handsome, preferably straight man,” Chozick adds.

In fact, according to Chozick, Clinton’s preference for male reporters went so far as to make her tolerate Fox News. “Hillary loved to spar with Ed Henry. She would regularly look past her almost entirely female press corps to call on the Fox News correspondent with his cherub cheeks and Pucci pocket squares,” she writes.

And when Chozick wrote an article (presumably this piece) about concerns about how the Clintons historically had treated women who claimed Bill Clinton sexually assaulted them, Hillary Clinton was furious: “Hillary erupted after that piece, angry I’d written about the Lena [Dunham] anecdote (which her publicist said had been mischaracterized) and quoted other young women wrestling with this issue.”

When I asked Clinton spokesman Nick Merrill for comment on Clinton’s depiction in Chozick’s book, he said: “I don’t want to get into the [he] said/she said on the individual facts in the book, but I will say that Hillary Clinton has spent her entire career championing women, and by action and example has always encouraged those around her—both men and women—to follow her example.”

A Clinton communications staffer, unnamed in the book but known to be Philippe Reines, once made a sexually crude comment to Chozick. She writes that the staffer said, paraphrasing from the movie “Thank You for Smoking”: “I didn’t know I had to say it was off the record when I was inside you.”

Asked about the incident, Reines said in an email to The Daily Signal:

I genuinely regret quoting a line from the movie ‘Thank You for Smoking’ that left Amy uncomfortable. It was certainly not my intention. Had she told me then or anytime over the five years before including it in her book, I would have immediately apologized to her. I hope she accepts my doing so now.

For more details on Reines’ views on Chozick’s book and this incident, read his Daily Signal op-ed here.

When New York Times columnist Maureen Dowd broke the news that then-Vice President Joe Biden was seriously considering running in 2016, it was Chozick who wrote the news story that made the front page. She recounts, using the word Brooklyn to mean Clinton campaign headquarters:

Hillary interpreted our Biden reporting as another Times smear. She sent the message to all her top aides. [Clinton strategist] Joel Benenson must’ve bitched me out for an hour. Maureen got it worse—in terms Brooklyn would’ve called sexist, had they been directed at Hillary.

‘What is wrong with this woman?!’ Huma [Abedin, Clinton aide] wrote, when a press aide emailed Maureen’s column around.

‘She is full of self-loathing,’ [Clinton communications director] Jen Palmieri chimed in.

One fascinating nugget from Chozick’s book is how much, by her account, the Clintons hate The New York Times, still furious over stories published in the ’90s.

But while the Times and the Clinton camp may have had plenty of tension—including the Clinton campaign’s regularly berating Chozick for her coverage—the Times also didn’t appear to operate like an objective outlet.

For instance, Chozick recounts of an article about Libya during the primaries: “The Times, afraid the story could affect the race, decided not to publish it until after the polls closed in South Carolina.”

Based on the fact that South Carolina’s Democratic primary was Feb. 27 and this Times story about Libya has a posting date of Feb. 27, 2016, on Google, I’m assuming Chozick means the article headlined, “Hillary Clinton, ‘Smart Power’ and a Dictator’s Fall.” Sure enough, the subhed suggests this wasn’t a pro-Hillary story: “The president was wary. The secretary of state was persuasive. But the ouster of Col. Muammar el-Qaddafi left Libya a failed state and a terrorist haven.”

But since when does a news outlet that portrays itself as nonideological and nonpartisan care about how the timing of its articles could affect an election?

Asked about Chozick’s allegation, Eileen Murphy, senior vice president of communications for The New York Times, said in an email, “The editor on this story does not believe it was held for any reason.”

Chozick also recounts that both she and her editors didn’t see the Loretta Lynch-Bill Clinton meeting as problematic. “In keeping with my inability to gauge Clinton scandals, I didn’t initially realize that a little tarmac small talk would become a major story … when I first ran it by my editors, they told me I could skip it.”

So let’s refresh: The spouse of a current presidential contender and a former president himself, whose wife is under FBI investigation for her use of email while secretary of state, talks to the attorney general and it’s no big deal. OK!

And while Chozick co-authored an article looking deeply into Clinton Foundation intrigue, she has a curious perspective on it. Recalling a pre-campaign trip to Africa to see firsthand the work of the foundation, Chozick writes, “It’s hard to care whether some sleazy foreign donor wants something from the State Department after you’ve seen a child hear for the first time.”

There’s also Chozick’s attitudes toward Republican presidential candidates Donald Trump and Carly Fiorina. Of Fiorina, Chozick writes, “A lot of what came out of her mouth was borderline crazy, but I still admired Carly’s ballsy self-delusion.” (Although, to her credit, Chozick is surprised that Clinton isn’t interested in complimenting Fiorina’s fellow attempt to break the glass ceiling.)

In the end, Chozick’s book mainly reads as a reminder of how insane political campaigns and reporting have gotten at the presidential level. My favorite part is when she describes the press rolling an orange over toward the staff and candidate section of the plane with a question on its peel, getting an answer back on the orange, and then having a panicked staff say that wasn’t an on-the-record answer from Clinton herself, but had been written by someone else.

In fact, throughout the book, Chozick describes how little access Clinton’s campaign would give reporters to Clinton herself and to any insights about her—and how even as a sympathetic reporter, she was given virtually no material to use.

“How could we communicate Hillary’s ‘funny, wicked, and wacky side’ to voters if we never saw it ourselves?” Chozick writes.