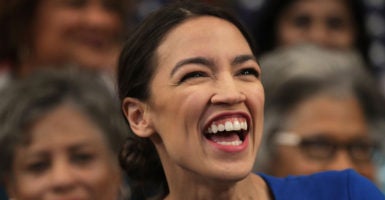 How is it possible, as a recent poll found, that a stunning 52 percent of millennials would like to live in a socialist or communist America? Pictured: New York Rep. Alexandria Ocasio-Cortez, who calls herself a democratic socialist, speaks Wednesday as House Democrats introduce the Paycheck Fairness Act. (Photo: Alex Wong/Getty Images)

If the future of the nation were a function of logic, then conservatives would have a very easy job.

No debate would be needed, really. In the choice between the two competing models Judeo-Christian civilization has given us, with socialist arguments for “big government” on the one side and a market-oriented system that favors the freedoms of the individual over the powers of the state on the other, there would be no contest.

In fact, it would indeed be a formal “no contest,” as only one of the models has ever been realized in the real world in which we live.

Adam Smith, Friedrich Hayek, Ludwig von Mises, and Milton Friedman may have had impeccable credentials in terms of theory, but the whole point of their work is that it occurred within the reality of functioning free markets.

The Laffer Curve was never condemned to remain locked within an ivory tower, solely to be read on the pages of a peer-reviewed journal. The ideas of these philosophical and economic greats were deployed in real time, in the real world, by democratically elected statesmen and leaders such as Ronald Reagan and Margaret Thatcher.

These ideas actually worked in practice. The same cannot be said of the theories of Karl Marx, Friedrich Engels, or Mao Zedong.

Since “The Communist Manifesto” and the later “Das Kapital” were published, nowhere on the planet has the system therein envisaged ever actually been implemented as designed.

Oh, yes, more than 40 countries as culturally diverse as the Soviet Union, Venezuela, and Vietnam have called themselves “socialist” states or said they were implementing the theories of Marx, Mao, and Lenin.

Instead, wherever socialism was tried, from Moscow to Beijing, from Havana to Pyongyang, the world witnessed the same result: oppression of the masses, power and wealth for the party nomenklatura, and most often an eventual economic collapse. This was so even in the country of communism’s birth, the Soviet Union, which imploded on Christmas Day 1991 under the weight of Marxism’s inherent contradictions.

As a result, Marxism and socialism have just remained theories, while democracy and capitalism became unbelievably vibrant realities from Great Britain to Poland, from America to Japan, from Estonia to India.

These realities have taken poor countries such as Singapore and turned them, in the space of less than two generations, into international success stories that Marx, horrified as he was by the smokestacks and exploitation of the textile mills of the Industrial Age, could never have imagined.

So how should conservatives respond to the cries of the millennials who so desperately wanted Sen. Bernie Sanders to become the 45th president, and who tell us: “What about Scandinavia and the Nordic states? What about Sweden, Norway, and Denmark, what about the socialist states of Europe that provide equality and welfare?”

Well, yes, these states value the individual over the collective, and they do provide incredibly generous welfare nets. But this has nothing to do with “command economies” or one-party states.

In fact, Danish Prime Minister Lars Lokke Rasmussen has had enough of this repeated calumny of the nations of Northern Europe. During a recent speech here in the United States, he said “some people in the U.S. associate the Nordic model with some sort of socialism.”

But, Rasmussen said, “I would like to make one thing clear. Denmark is far from a socialist planned economy. Denmark is a market economy.” He added that his country is “a successful market economy with much freedom to pursue your dreams and live your life as you wish.”

The truth is, the Nordic and Scandinavian nations have built incredibly equitable societies with provisions for the needy because of their decidedly unsocialist history, and thanks to the free market. All of them have histories as successful capitalist economies, often based on shared centuries of mercantilist competition, with Norway additionally being one of the world’s largest exporters of oil, allowing it to fund its generous benefits.

And truth be told, the largesse that the peoples of these states have shown themselves by erecting welfare states built upon the profits of the past is straining their national coffers today, as their populations age and the costs of their welfare programs eat away at the limited taxes the state can collect. As a result, expect to hear more statements such as the one made by the Danish prime minister.

But what of the other riposte: that all of the past’s socialist “experiments” failed simply because the wrong people implemented them? The logic here being that all you need is the right “elite” to make Marx’s dream become reality, not equality to be realized.

Maybe. Or maybe not.

As Einstein taught us, systematic repetition of failure accompanied by the expectation of getting a different result is the definition of insanity. After a century of trying, with hundreds of millions of people used as guinea pigs, where is the realistic and moral justification for “just one more try?”

Most importantly, look at the facts that left-wing historians gave us in “The Black Book of Communism,” wherein they provided an accounting of all the attempts to create functioning Marxist states. The authors concluded that attempts to realize the “socialist state” led to the programmatic deaths of over 100 million human beings, from the gulags of Siberia to the killing fields of Cambodia.

As a result, one more try at Marx’s idyll would seem not only immoral, but to dishonor the memories of those killed in the name of a man-made utopia.

So how it is that the conservative argument for the American dream is still not triumphant? How is it that of all the Democrats who ran for office in the November midterm elections, more than 40 proudly declared themselves “socialists,” including the new face of the party, Alexandria Ocasio-Cortez?

And how is it that according to the latest annual poll by the Victims of Communism Memorial Foundation, a stunning 52 percent of millennials would like to live in a socialist or communist America? How is this possible?

Simple. More than ever, politics today is a function less of verities than emotional connection. A sense of authenticity over the rectitude of any suggested policy.

It is no accident that President Donald Trump was the star of his own reality TV show for 14 seasons before he ran in a presidential campaign during which he defeated 16 rivals for the GOP nomination, 14 of whom were established political names.

More importantly, as members of a philosophical community that shares the same commitment to the economic and political principles that define our view of America, we have failed utterly to understand the role of the dreaded word “narrative.”

Most Americans are apolitical and couldn’t tell you the difference between Matt Drudge and Paul Krugman. They want to be able to pay the bills at the end of the month, and to feel secure about their future and the future of their families. But even the most apolitical American citizen associates certain key characteristics with each side of the political divide.

The left is seen as having an almost monopolistic hold on compassion, on caring for those who need help the most. The right today is identified by only negatives: lack of compassion, greed, exploitative big business. Even capitalism is understood as a dirty word, redolent of cronyism and unaccountable profiteering.

For those who not only believe but know that free markets and democracy have empowered hundreds of millions of people to live freely and climb out of poverty, in fact more than any other political philosophy has ever done, we must go back to square one.

Our challenge is not one of facts and figures, but emotions, of talking in ways that connect to souls held hostage to the utopian panaceas of false prophets and idols.

The ancient Greeks who carved the foundation stones of our future civilization, who invented political philosophy, wrote almost exclusively about one thing: What is the “good?” What is a “good society,” and what makes for a “good” man or woman?

In the years since the end of the Cold War and the presidency of Ronald Reagan, conservatives have allowed the pernicious and deadly ideas of the left to become exclusively associated with the “good.”

Our job is simple but hard. We must show—not tell—our fellow Americans that the good is inextricably tied to freedom, to small government, to free markets, and to earned success, and that circumscribed lives, big government, constrained economies, and federal handouts destroy the soul and sap the life blood of healthy societies.

With his capacity to connect to the forgotten men and women of America, to the unemployed steel workers of the Rust Belt, with his ability to win over black communities in numbers we have not seen in decades, Donald Trump has opened a window for the conservative movement of the 21st century.

Now it is our job to convince fellow Americans that the principles of our Founding can provide for them better than any version of socialism ever could, that American exceptionalism is real and “good,” and that all of us can be a part of the American dream no matter who we are.