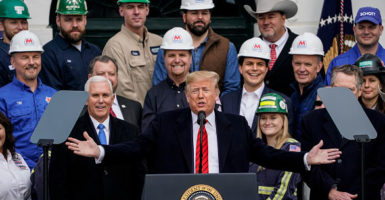 “This is something we really put our heart into,” Trump said at the bill-signing ceremony Wednesday on the South Lawn outside the White House.

He then quipped: “It’s probably the No. 1 reason that I decided to lead this crazy life that I’m leading right now, as opposed to that beautiful, simple life of luxury I led before this happened.”

The USMCA prohibits the signatories from imposing protectionist restrictions on e-commerce, which barely existed when NAFTA was ratified in 1994; boosts U.S. agricultural producers’ access to the Canadian market to sell dairy and poultry products; and offers new protections for patents.

However, in a consequence of divided government, the trade agreement also creates some trade barriers, such as environmental and labor provisions, that could boost costs.

Trump signed one of his signature legislative achievements—which passed Congress by big bipartisan numbers—at a time of significant partisan acrimony as his impeachment trial continues in the Senate.

The Democrat-controlled House passed the trade agreement 385-41, and the Republican-controlled Senate approved it 89-10. No Democrats attended the signing, however.

“The USMCA is the first trade deal in nearly two decades to be endorsed by the AFL-CIO,” Trump noted during remarks made as he stood in front of invited workers, many of whom wore hard hats.

“We’re finally ending the NAFTA nightmare,” the president said before signing the new agreement with Canada and Mexico.

He went on to slam the North American Free Trade Agreement, which was signed in 1994 by President Bill Clinton, a Democrat, but supported largely by Republican lawmakers.

Thousands of factories were shuttered. Millions of manufacturing jobs were destroyed and entire communities were devastated from Ohio to Pennsylvania, Michigan to Maine, California to North Carolina. Devastated.

Two decades of politicians ran for office vowing to replace NAFTA. This was a catastrophe. Yet, once elected, they never even tried. They never even gave it a shot. They sold out.

After the Trump administration reached the USMCA agreement with Mexico and Canada, House Democrats held up the deal for about 14 months.

“The USMCA continues NAFTA’s tariff-free treatment of many goods and services but also opens up new markets for American farmers to sell their goods,” James said in a formal statement. “The USMCA promotes the development of more new and innovative products by strengthening protections for intellectual property rights.”