What You Need to Know About the New Trade Deal 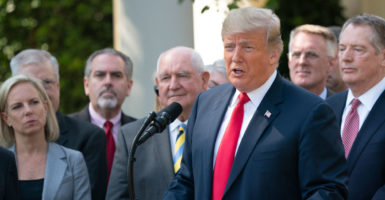 This is a transcript of an interview on the Oct. 2 Daily Signal podcast.

Katrina Trinko: So, before we break out the champagne and start a chorus of USMCA, we’re bringing in The Heritage Foundation’s Tori Whiting, who is the Jay Van Andel trade economist, to talk to us about this deal and why it matters.

So Tori, first off, what are some significant changes in this trade deal? How does it differ from the former agreement we had in place between the U.S., Mexico, and Canada?

Tori Whiting: Well, the first thing to point out with this agreement is that despite the weeks and weeks of uncertainty about whether or not Canada was going to be involved in it, we do in fact have a trilateral renegotiation, which is a huge, huge accomplishment. We were really worried that it was going to end up being bilateral and that would cause a lot of disruption to supply chains.

Now, there are lots of changes in this agreement. It’s almost 1,700 pages long. It’s going take a lot of time for Heritage analysts to get through, but some of them—

Trinko: I bet you are also really excited to read 1,700 pages.

Whiting: Well, luckily, I have a lot of great experts here at Heritage in different issue areas that help dig down to the details.

But one of the biggest accomplishments I think that we’re going to see in this is the effort in which the administration took to modernize the new USMCA, or NAFTA 2.0, however, you want to refer to it. And I think that that really helps us get into the 21st century and trade with things like intellectual property, digital trade, services, financial services, and all these new kind of a 21st-century types of products.

Ginny Montalbano: Tori, what is the biggest benefit for these three countries being a part of such an agreement like this?

Whiting: Well, NAFTA, in 1994, did a great thing where it created the largest free trade area in the world, one of the largest. And what that means is that it helped North America become a region where we were being very, very competitive at lots of different areas of production, specifically manufacturing.

So moving this agreement forward, like I said before, in a trilateral way, really preserves that ecosystem that has been created over 25 years and can help our businesses, say automakers or other manufacturers, maintain their supply chains that make them so efficient so that we can export our products abroad.

Trinko: Of course, one of the things that President Trump has made very clear is that he’s interested in bringing jobs back to the United States, having more of a robust manufacturing sector.

I asked some of our followers on Twitter if any of them had questions for you and on Twitter Nancy H. asked, “Have U.S. companies discussed plans to build new plants in the U.S.—timeline?

So do you think that this deal, obviously, there’s a lot that happens that is not set in stone, but potentially could it lead to perhaps more manufacturing in the U.S.?

Whiting: Well, here’s the thing, manufacturing jobs are actually up right now. This year, I think I just looked at the statistics today, the U.S. has added 139,000 manufacturing jobs since January. That’s huge. And unemployment is at the lowest rate that it’s been in many, many years, and so we’re looking at a great environment to do business here in America.

Now, one thing that this concluded renegotiation can result in is increased certainty in the North American market and in the United States. When businesses know that some sort of NAFTA agreement is so going to be in place in the future, they’re going to be more likely to be building factories and hiring workers in America.

Montalbano: Tori, when it comes to tariffs, the U.S. has imposed many on Canada and Mexico this year. Where does that stand with this new agreement?

Whiting: Well, this is one of the unfortunate aspects of the result of this renegotiation. The administration said to begin with that these tariffs were a negotiating tactic and that once we reached a new NAFTA, they would remove the tariffs on Canada and Mexico and that actually hasn’t happened yet and it’s unclear whether or not the administration will really eliminate these tariffs.

And that just makes it so that our manufacturers that use steel and aluminum as a means of production, they’re going to be less competitive because it will increase the price of their final goods that they want to export.

Trinko: Now, I understand this news has some big implications if you’re a dairy farmer. Could you perhaps expound upon that?

Whiting: Yes. So the dairy details are a little bit unclear and I haven’t totally dug into that chapter yet.

Trinko: You haven’t read all 1,700 pages before doing this podcast in six hours? This is unbelievable. OK.

Whiting: Not yet, but it looks like the administration did make some gains in regards to dairy and that’s really promising because anything that we can do to help lower tariffs and non-tariff barriers for U.S. exporters is a positive thing. So I look forward to looking into those details more.

Montalbano: Tori, what comes next? Like you just said, there are so many pages and things to tackle, but after all the analysis comes through, what can we expect to hear from the research side, from you and other experts, but also what’s next for the administration to do?

Whiting: Well, I’d say that right now with the NAFTA renegotiation USMCA, we’re kind of at halftime. We’ve reached some great points. We have a text, but there’s actually still a lot left to go.

The administration, the International Trade Commission specifically within the administration, will do a full-scale economic analysis of this new agreement and what they’ll look at is the impact that it will have on jobs and the impact it’ll have on economic growth. And that’ll take probably about 100 days or so for that to happen. It’s a very big endeavor.

Heritage will also be doing its own economic analysis, but it’ll be mostly focused on, have we lowered tariffs, have we lowered non-tariff barriers, and have we modernized NAFTA for the 21st-century?

Next step after that is Congress. Congress has the final say when it comes to this USMCA and whether or not it will become law. So, we’ll probably look at early spring, I’d say at the earliest, where the new Congress, in 2019, will have the opportunity to vote on this new agreement.

Trinko: In terms of our trade deals with other countries, obviously USMCA is not directly related, but do you think it has a connection? Does it possibly suggest an administration’s mindset that might be applied to other trade deals? What, if anything, can we learn about the overall approach to trade from this?

Whiting: Well, at first glance, a lot of the modernization aspects of the USMCA actually come from the Trans-Pacific Partnership, which is the agreement that President Trump actually pulled the United States out of at the beginning of his term as president.

So those are things like intellectual property, I think even state-owned enterprises, digital trade, a lot of these 21st-century mechanisms. But what I think this does show, and we’ve already seen a little bit of it, the U.S. and Japan actually just announced that they’re going to be conducting negotiations for a bilateral free trade agreement.

And so this really kind of signals, I think, a move by the administration to at least try to advance some aspects of opening trade. I hope that those efforts are really focused on decreasing tariffs and decreasing non-tariff barriers and not producing these managed trade environments, which I have a feeling that the USMCA might have a little bit of.

Montalbano: Tori, did you get a chance to watch President Trump speak about all this in the Rose Garden?

Whiting: Yes, I did.

Montalbano: Did anything stand out to you in those remarks? They were quite lengthy.

Whiting: Yes, they were. I think overall, what the president has in mind for wanting to help manufacturing grow United States. And it was really encouraging to see him be positive about the North American aspect of this. It’s not something that has been the focus in the past. And so I’m optimistic that they’re very committed to getting this across the finish line.

Whiting: I say NAFTA, but who knows, the USMCA kind of reminds me of the Marine Corps. And then somebody said earlier that they thought it sounded like YMCA.

Trinko: Right, which I think is very exciting.

Whiting: Maybe the name is like an intermediate name and Congress will come up with a better one later.

Trinko: I don’t know, President Trump seems very invested in it. Well, thank you for joining us, Tori. Good luck reading that.

Whiting: Thank you so much.