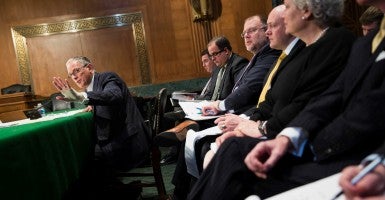 The Export-Import Bank’s relationship with a politically connected consulting firm has come under scrutiny as its clients benefited from millions of dollars in financing from the bank.

However, a Freedom of Information Act request filed by a government watchdog has been pending for more than 500 days, highlighting the Export-Import Bank’s issues with transparency.

“They’re just unresponsive,” Veronique de Rugy, senior fellow at the Mercatus Center at George Mason University, told The Daily Signal. “They just seem to refuse to let [the public] in.”

McLarty Associates—run by former President Bill Clinton’s Chief of Staff Thomas McLarty—bills itself as a consulting firm with a “global footprint,” and hasn’t lobbied Congress since 2005. It does, however, maintain strong ties with former and current officials with the Export-Import Bank. Additionally, several of McLarty Associates’ clients benefited from millions of dollars in financing from the agency.

To further explore McLarty Associates’ ties with the Export-Import Bank, watchdog group Americans for Limited Government filed a Freedom of Information Act request with the agency in November 2013.

The bank, according to its public log, has yet to produce the documents and told the group a legal review is being performed.

“There’s a number of problems with the Ex-Im Bank. You have to ask the question, ‘Did the people who obtained business do it on the merits of any application filed, or was it partially or fully a result of contact with the right people?’” Nathan Mehrens, president of Americans for Limited Government, told The Daily Signal. “If there’s cronyism going on there, then that needs to be disclosed and dealt with.”

The Freedom of Information Act maintains nine disclosure exemptions that would allow an agency to redact or exclude requested information. However, Mehrens said Ex-Im officials have made “no assertions of privilege” or claims of “any records being exempt.”

“We don’t know they have information to say that, but we know there are records,” he said. “What’s in those records could be enlightening. If it does show there’s better access granted because of their contacts, that’s something the public needs to know about.”

According to the bank’s 2014 FOIA annual report—released Jan. 27—there were 38 requests pending as of Sept. 30. Just three were fully denied because of exemptions. The agency took an average of 86 days to respond to all processed “simple” requests in which information was granted and 185 days to respond to “complex” requests in which information was granted.

Americans for Limited Government has waited more than 500 days for its information.

Mehrens does contend that some requests making their way through legal review can be “enormous undertakings.”

“If we get to the end of this and there’s three pages of email, then this was totally ridiculous and they should’ve turned them over,” he said. “If it’s 1,000 pages or a few hundred pages of documents that require legal review, that may be reasonable.”

“Answering our questions is not optional. It’s an obligation. They need to answer our questions,” said @VerodeRugy.

The Export-Import Bank provides taxpayer-backed loans and loan guarantees to foreign companies and countries for the purchase of U.S. products. The agency has existed for more than 80 years, but a robust debate over Ex-Im’s future developed last year as the bank approached the end of its charter.

Congress ultimately extended the bank’s existing authorization through the end of June 2015, and lawmakers are once again exploring whether Ex-Im should continue to exist.

Proponents of the bank believe it creates jobs in the U.S. and helps small businesses compete in the global market. Opponents, meanwhile, believe Ex-Im is an engine of cronyism and corporate welfare.

“The reason why we’re involved in requesting the information is from the accountability standpoint of what this bank is doing and are they playing by the rules or granting lobbyists favors?” Mehrens said.

According to Ex-Im’s website, the bank is “working hard to become more transparent, participatory and collaborative by providing data that has not been previously available in an open format and a mechanism for the public to submit feedback.”

However, de Rugy noticed in February the bank had removed public datasets from Data.gov, a government website.

“It’s [the public’s] right to demand accountability from an institution that actually put us in the situation where we pay the money lent to foreign companies,” she told The Daily Signal. “That’s the least [the bank] can do. They’re going to be risking our money. They should be accountable for any dollar of exposure, and any risks should be thoroughly documented and it should be accountable for.”

When asked about Ex-Im’s delayed response to Americans for Limited Government’s FOIA request, de Rugy said information about McLarty’s political connectedness to the bank could be “detrimental to its survival.”

“It’s just outrageous,” she said. “We don’t know whether they were always like this, but either way, it’s not acceptable. Answering our questions is not optional. It’s an obligation. They need to answer our questions.”

de Rugy said Ex-Im officials, including those in its public affairs office, have continued to stonewall reporters and scholars despite increased scrutiny.

“The bank is one of the least transparent organizations I’ve had to deal with,” she said. “Granted, I have not dealt with everything, but this one is particularly bad. They don’t seem to have any response or any understanding for the fact that they work for us, taxpayers, and we should be able to check what they’re doing.”