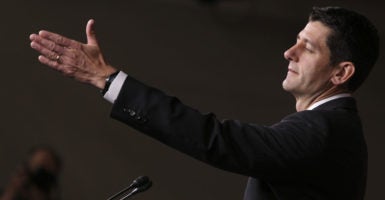 House Speaker Paul Ryan is calling for the United States to engage in a free trade agreement with the United Kingdom once it completes the process of separating from the European Union.

Seeking to preserve the “special relationship” between the two nations, Ryan, R-Wis., said the U.S. should pursue a unique trade partnership with the U.K.

In interviews Friday with Wisconsin media, Ryan said this deal should be negotiated on a “parallel track” with current U.S. negotiations with the European Union on a pact known as the Transatlantic Trade and Investment Partnership.

Ryan said the agreement with Britain would be easier to implement than the European Union trade deal.

“We need to emphasize that they are our indispensable ally,” Ryan told Milwaukee’s WISN radio. “We have a special relationship, and I think that does mean we should have a trade agreement with England—with Great Britain.”

On June 23, Britain became the first of the EU’s 28 members to decide to leave the bloc, through a voter referendum known as Brexit.

>>> What Brexit Means for the European Union’s Future

Britain cannot begin the process of formally withdrawing from the EU until it invokes Article 50, which would set a two-year timeline for negotiations.

In addition to defining its future relationship with the U.S., Britain also will have to negotiate its future ties to the European Union, balancing its interest in maintaining trade with the bloc and keeping its sovereignty and control over immigration.

The process may be more complex than the trade discussions that inevitably will emerge between the U.S. and Britain.

The U.K. cannot negotiate separately with the U.S. until it completes the exit process from the EU.

“Trade with England is very big between our two countries and very beneficial for our two countries, not like some of the other countries we’ve had problems with,” Ryan said. “I think we should make sure that our trading relationship is stable, so that our respective economies are not affected, but actually improved.”