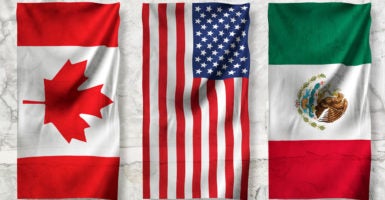 This agreement is an opportunity for freer trade and to grow our economy, reduce prices, and increase our exports to the world, creating higher-paying jobs. (Photo: Stock/Getty Images)

President Donald Trump’s United States-Mexico-Canada Agreement is finally up for a vote this week—just in time for Christmas.

After nearly a year of delay, this gift for the American people represents an opportunity for freer trade and a chance to grow our economy, reduce prices on many goods, and increase our exports to the world, creating more and higher-paying jobs in the process.

As we all know, just like with other Christmas gifts, you also can get the occasional ugly sweater that you really didn’t want. The same is true here.

Some compromises were made to get USMCA through Congress, such as labor and environmental provisions that actually will create some barriers to trade and cause cost increases with certain goods.

However, just like you wouldn’t cancel Christmas gift-giving because you might get one of Aunt Janice’s homemade reindeer sweaters, the effect of these extra provisions doesn’t outweigh the fact that the overall agreement is truly in the best interest of America’s families, workers, businesses, and farmers.

The United States-Mexico-Canada Agreement would update the North American Free Trade Agreement. NAFTA, passed in 1994, created one of the largest free trade zones in the world, allowing America to export more products and services, create more jobs, and grow the economy.

Additionally, NAFTA allowed American businesses to develop better supply chains where they could draw from the best and most competitively priced products and raw materials from throughout North America. Businesses could trade them across borders without tariffs, lowering the overall costs of the end products. That process has helped many American products become even more competitively priced around the world.

USMCA continues NAFTA’s benefits while also opening up new markets for American farmers to sell their goods. Specifically, U.S. agricultural producers will have better access to the Canadian market to sell products such as milk, cheese, wheat, chicken, eggs, and turkey.

Moreover, one of the most significant gains with the new trade agreement is the assurance that an ever-growing way of doing business—digital trade—will remain free. When NAFTA was created, e-commerce didn’t really exist, and buying and selling freely over the internet wasn’t an issue. USMCA prohibits our member governments from imposing protectionist regulations that could inhibit companies and individuals from trading online across borders.

USMCA also includes new protections for patents, copyrights, and trademarks. This will benefit consumers by bringing more innovative products and services to market, as inventors and investors are able to create them without fear of them being stolen by others within the free trade zone.

Finally, moving forward with USMCA should allow many businesses to get back on track with expansions of their facilities and the hiring of new workers—plans that had been put on hold because of the uncertainty involved in waiting for the details of a new trade agreement. Knowing the rules helps to alleviate the uncertainty that businesses have felt.

As to the ugly sweater part of this agreement, compromises were made to get it through Congress.

USMCA contains some provisions that actually create barriers to trade rather than free it up—making goods and services more expensive or stifling trade altogether. While certain environmental standards and labor standards, like imposing minimum wages and standards for working conditions in Mexico, may seem well intentioned, they create an anathema to free trade—more government interference—and also weaken Mexico’s sovereign ability to determine its own laws.

Another provision increases the “rules of origin” requirements for automakers that could actually increase prices on automobiles. USMCA would require that 75% of auto content be made in North America. If automakers couldn’t get or didn’t use parts that met that threshold, they would be required to pay a tariff on them.

Although this provision is meant to drive more automotive production into North America, it could actually have the unintended consequence of increasing costs and making auto manufacturing less competitive in the global marketplace, leading to lower sales.

Because of these provisions, USMCA should not be considered a model for future agreements. Free trade agreements should focus narrowly on facilitating free trade. However, these compromises reflect the realities of our divided government and they don’t outweigh the fact that the overall agreement remains a solid win for the American people.

The bottom line: If passed, the United States-Mexico-Canada Agreement means freer trade, and freer trade means billions of dollars in new economic activity, new jobs, higher wages, and lower prices for the American people and for our North American neighbors.

That’s a win-win-win everyone can get behind.