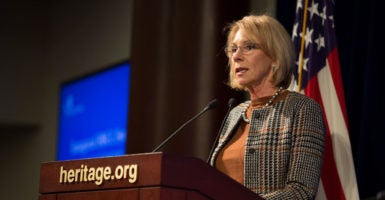 Education Secretary Betsy DeVos gave a pep talk Thursday to representatives and supporters of historically black colleges and universities gathered to discuss how to ensure they remain competitive in preparing students for a quickly changing job market.

Historically black colleges and universities, or HBCUs, defined in federal law, “are cultural institutions with storied legacies that are unique and remarkable,” DeVos said at The Heritage Foundation, which organized the forum.

“Today, I encourage you to think about how your institutions will be known decades from now, in addition to being an HBCU,” she said at the event at the think tank’s Capitol Hill headquarters, called the Historically Black Colleges and Universities Forum.

DeVos cited Johnathan Holifield, executive director of President Donald Trump’s HBCU initiative and a forum participant, saying that Holifield likes to ask how each of the roughly 100 designated schools will stay competitive.

“A strong heritage, coupled with a strong vision for the future, can foster a competitive edge,” she said. “And I know that the question you are asking yourself every day is ‘How are we going to be relevant and distinctive five, 10, 20 years from now?’”

DeVos went on to say:

I know some HBCUs have opened public charter schools on their campuses, and others have forged partnerships elsewhere to improve the K-12 pipeline. Your competitiveness ultimately depends on your most valuable assets, your students. Helping them be better prepared before they walk your halls serves to strengthen their futures and your institutions. …

Educators, business leaders, community leaders, and, yes, even politicians must work in concert to put the success of students above everything else. After all, they are 100% of our future.

DeVos said the Trump administration’s work with historically black schools is a “valued partnership” and outlined what she called “a strong record of action for HBCUs and their students,” including:

“While others tried half measures or short-term fixes, we took the bold steps necessary to help students succeed in the long term,” she said.

—Resurrecting the HBCU Capital Financing Advisory Board and increasing spending for programs at black colleges, including those at faith-based schools that she said had been “unconstitutionally excluded.”

—Expanding Pell Grant eligibility so students may attend class year-round, as well as increasing the maximum a student may be awarded.

—“Reviewing, rewriting, or removing onerous regulations that are impediments to HBCUs and their missions.”

Among those scrapped was the Obama administration’s “gainful employment” rule, which DeVos said had given bureaucrats the “power to punish or even close colleges and programs that didn’t match the prior administration’s policies and preferences.”

—Modernizing student aid through initiatives such as the myStudentAid app, or software application, which she encouraged participants to download and try out.

—Updating the department’s College Scorecard so that information about higher education options is “way more useful for students to make informed decisions.”

DeVos took the opportunity to tout legislation to create Education Freedom Scholarships through a federal tax credit to support state-led efforts to expand choices for students and parents outside traditional K-12 public schools.

“We are very excited for the prospects of how this will provide rocket fuel to efforts that states already have engaged in and that some are on the verge of engaging in,” she said.

“Thank you for your commitment,” DeVos told her audience in closing. “President Trump and I value our continued collaboration.”