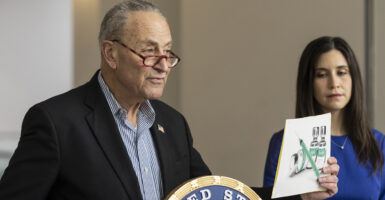 If congressional Democrats have their way, new regulations will make it harder for Americans to access lifesaving pharmaceuticals such as insulin. Pictured: Majority Leader Charles Schumer, D-N.Y., demands a Senate vote on capping the cost of insulin at a Feb. 20 press conference in New York City. (Photo: Lev Radin/Pacific Press/LightRocket via Getty Images)

Rep. Kevin Hern, a Republican, represents the 1st Congressional District of Oklahoma. He is a member of the House Ways and Means Committee.

Over the past several decades, the federal government has exercised unprecedented control over aspects of American life that our Founders never intended—including your personal medical decisions.

As a life-long job creator and small business owner, I know the dangers of an intrusive government.

Regulators in the executive branch don’t know what it takes to develop a product, find your market, and turn it into a sustainable business. They’ve never been accountable to customers, employees, or shareholders. As a result, their regulations hinder growth and innovation.

If Democrats have their way, new regulations will make it harder for Americans to access lifesaving pharmaceuticals such as insulin. They want to use fear tactics to get Republicans to support socialist price controls, so they can pass it off as a “bipartisan” win before the midterm elections.

In reality, price controls would be detrimental to patients who need insulin.

None of this helps Americans with diabetes, whose lives depend on their access to insulin. These regulations and price controls almost always result in higher health insurance premiums. In fact, one study found that premiums for plans that cap insulin cost double those that don’t.

If socialist price caps aren’t the answer, how do we lower insulin costs for those with diabetes? It’s simple: Get the government out of the way and let the market create competition, resulting in lower costs for consumers.

According to a 2018 report from the American Diabetes Association’s Insulin Access and Affordability Working Group, more biosimilar products must be developed in order to lower the price of insulin.

The working group is blunt about the obstacle for that to happen: the U.S. Food and Drug Administration.

According to the group, the “increased regulatory burden associated with the development of biosimilars is deterring manufacturers from producing biosimilar insulins.”

What are those regulatory burdens? Mountains of paperwork that innovators must wade through, not only to prove their biosimilar is clinically effective, but to be deemed “interchangeable” with the original biologic medication. If a biosimilar is deemed “interchangeable” by the FDA, a pharmacist may fill a prescription written for the original with a biosimilar—much like pharmacists currently do for other types of medications with so-called generic medications.

As a result, patients pay lower prices for the biosimilar. The more biosimilars in the market, the lower the price. Competition between brands always has been the most effective tool to lower prices and increase quality.

That additional paperwork burden isn’t necessary. Patients don’t need the government telling them what to do; they can work with their pharmacist to decide what the best and most cost-effective option is for themselves and their families.

To speed up the approval process for biosimilar insulin, lawmakers should get rid of the extra regulatory burden placed on drug manufacturers and allow the free market to do what it does best: compete. Removing those unnecessary burdens would promote competition in the market and truly drive down the price of insulin.

There is some good news. In 2021, the Food and Drug Administration finally approved two new biosimilar insulins, Semglee and Rezvoglar. Investigators determined that biosimilars such as these could be sold at up to a 91.4% or 93.8% discount from the original biologic drug.

Semglee and Rezvoglar just now are hitting the market, or will be soon. Six more insulin products await FDA approval to go to market in the next few years.

As is typical with Democrats, they’re not waiting to see how these newly approved drugs bring down costs. They’re trying to use the government to solve a government-created problem and introduce socialist price controls to cap the price of insulin, passing the extra costs back onto taxpayers in the form of higher premiums.

Even worse, Democrats’ bill would lock insulin prices at their 2021 level, effectively freezing future biosimilar generic drugs at that price and preventing the makers of competitive drugs from lowering market prices permanently.

No one wins under government-run health care. Take a look at wait times for the Department of Veteran Affairs or the U.K.’s National Health Service. Socialized medicine does not incentivize lower costs or better care; it rewards stagnancy.

Instead, we should do everything in our power to get the government out of the way.