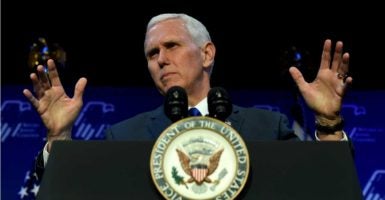 Vice President Mike Pence stressed to a group of college administrators that the Trump administration is committed to greater education choice for elementary and high school students.

“Parents on an increasing basis are able to choose for their young children the school regardless of their income and area code,” @mike_pence says.

The vice president spoke Monday at the White House Historically Black Colleges and Universities 2017 Listening Session at the Eisenhower Executive Office Building, near the White House. The bulk of his remarks were about the contributions of the more than 100 HBCUs in 19 states, and the administration’s desire to partner with the schools.

“Secretary DeVos is dedicated to expanding opportunities through educational choice all across this country, ensuring that whether it’s a public school, a public charter school, or even a private school, that parents on an increasing basis are able to choose for their young children the school regardless of their income and area code,” Pence said.

Research has shown education choice to be particularly helpful to minority communities.

A Harvard study of New York City found minority students with scholarships “to attend private elementary schools in 1997 were, as of 2013, 10 percent more likely to enroll in college and 35 percent more likely than their peers in public school to obtain a bachelor’s degree.”

A Department of Education study of the D.C. Opportunity Scholarship Program found participants had a 21 percentage point increase in graduation rates.

The Trump administration could be moving away from the policies of the Obama administration, which sought to defund the D.C. Opportunity Scholarship Program, said Lindsey Burke, director of education policy studies at The Heritage Foundation.

Though, Burke added, the federal government is fairly limited in what it can do on the issue, aside from President Donald Trump, DeVos, and others using the bully pulpit to promote choice. The exception for a direct impact is the D.C. program, which is funded through Congress.

“Trump could do a lot as a sign of support and expand school choice in a big way by transitioning D.C. to an all choice system,” Burke told The Daily Signal.

With a renewed commitment to expanding school choice for our children, we can truly make a great education possible for every child in America.

As our country celebrates National School Choice Week, I encourage parents to evaluate the educational opportunities available for their children. I also encourage state lawmakers and federal lawmakers to expand school choice for millions of additional students.