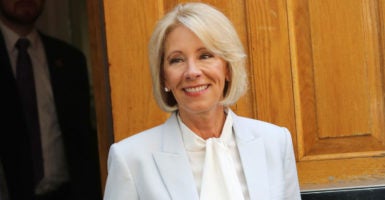 Another damaging Obama regulation is heading for the ash heap, which is great news for students.

The New York Times and Wall Street Journal are reporting that the Department of Education is planning to fully rescind the “gainful employment” regulations promulgated by the Obama administration.

Those regulations largely target proprietary or “for-profit” institutions of higher education. They require vocational programs, along with some programs at community colleges, to achieve certain debt-to-income ratios for their graduates. That is, students who participate in those programs must have a certain level of income in comparison with their student debt: Loan repayments can constitute no more than 8 percent of their earnings, and no more than 20 percent of their discretionary income.

This is a classic government-knows-best policy that would have significantly limited choices for students. Education Secretary Betsy DeVos is right to roll back the policy.

The Obama gainful employment rule was clearly designed to affect certain types of schools. The rule was not applied evenly across all institutions—traditional four-year colleges were insulated from it. Yet, if the regulation were extended to traditional colleges offering gainful employment-eligible programs, they would also largely fail the measure. This suggests the rule’s application to for-profit schools was more about politics than prudent policy.

This rule would have placed unrealistic expectations on many graduates. Considering that the average college graduate holds $29,000 in student loan debt, students would have to earn more than $32,000 upon graduation to fulfill the 8 percent debt-to-earnings ratio. What’s more, the average debt-to-earnings ratio among all graduates of U.S. institutions broadly is 13 percent, and for more than a third of those students, the ratio is 12 percent, according to the National Center for Education Statistics.

Simply put, the arbitrary 8 to 12 percent standard would be disastrous if applied evenly to schools across the board, as many programs and four-year public institutions would fail the gainful employment rules. Yet the Obama administration chose to target proprietary institutions and some programs at community colleges while shielding other schools. Marc Jerome of the James G. Martin Center explains:

The School of Visual Arts is a well-respected, highly competitive fine arts and design college in New York that happens to be for-profit. It has a high graduation rate (66 percent), a low student loan default rate (7 percent), and a low number of defaulters (59). These are exemplary outcomes, but because its graduates pursue creative and fine art careers that do not pay very much the first few years after graduation, many of its programs won’t pass the regulation. … [V]irtually all programs at fine arts colleges in the country would fail the rule. However, only for-profit programs like those at the School of Visual Arts would be penalized and ultimately shut down as a result. The non-profit schools get a free pass.

In addition to unfairly targeting proprietary schools, the rule limits options for students. As Harry C. Alford, president and CEO of the National Black Chamber of Commerce, explained in a congressional hearing:

The black-owned businesses that I represent rely on graduates of proprietary colleges targeted by the recent gainful employment rule. These proprietary colleges serve minority, low-income, and high-risk students at much greater numbers than traditional four-year institutions and have more success doing it. As issued by the Department of Education, the gainful employment rule will limit college access to scores of minority students.

Rolling back the gainful employment rule is smart policy that will ensure students have access to a wide variety of higher education options to help them achieve their life and career goals. One caveat, however. The New York Times reports:

The Education Department wrote in the draft rule that it planned to update the scorecard with information about specific programs for all colleges and universities that are eligible for federal financial aid, ‘thus improving transparency and providing information to students to inform their enrollment decisions through a market-based accountability system.’

Adding new reporting requirements to the federal college scorecard isn’t ideal, but it is preferable to a politicized gainful employment rule that targets the proprietary sector, threatens students attending these schools with the loss of student loans and grants, and ultimately, limits choices for students.

Many students seek out vocational training as a means of establishing a meaningful, long-term career in a critical field. The government should not penalize them for that choice.