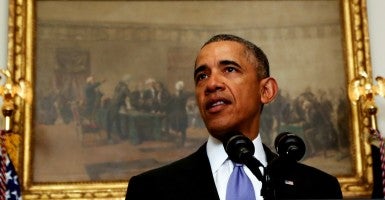 Families will not only feel the pain of higher energy prices directly, but also indirectly through increases in the costs of almost all of the goods and services they buy. (Photo: Polaris/Newscom)

In a major setback to the Obama administration’s climate agenda, the U.S. Supreme Court in a 5-4 vote blocked the Environmental Protection Agency (EPA)’s Clean Power Plan from taking effect until the legal challenges from states and industry groups fully play out.

The decision is important for states refusing to submit state implementation plans and opposing the Clean Power Plan. If states had to submit plans to meet their respective carbon cut targets, the rule could have taken effect prior to a final court decision. Without the Supreme Court blocking the regulation, the wheels could have already been set in motion to close many of the existing fleet of power plants with little to no hope of reopening no matter how the legal battle played out.

The plan, which the EPA finalized in October 2015, requires most states to meet individual carbon dioxide emissions reduction goals for existing power plants by 2022 and again in 2030. States are to submit plans about how they would comply with the regulations by September but could ask for two-year extensions. As Politico reports, “[l]awsuits over the rule are expected to continue into 2017 at the earliest, with the Supreme Court widely expected to be the final arbiter of the regulation.”

To be clear, the Clean Power Plan has nothing to do with regulating pollutants that have adverse impacts on human health. Instead, it focuses strictly on attempting to combat global warming. Attempting is the operative word.

Even if you accept the administration’s premise that climate change is an urgent threat (which is questionable), the regulation would have almost no effect on global warming. If the states implemented the regulations flawlessly, a near impossibility, the Clean Power Plan would avert a mere 0.02 degrees Celsius by 2100.

Obama’s climate regulations would carry exorbitant costs by having the EPA play the role of energy central planner. The key component of the state and industry legal challenge is that the Clean Power Plan grossly exceeded the authority of the EPA.

Past EPA regulations set emissions limits based on the actual source of emissions (the power plant), as opposed to providing alternative scenarios to reduce greenhouse gas emissions that have nothing to do with the power plant itself. These parts of the plan grossly exceed the statutory authority of the EPA.

For instance, the agency would incentivize states with extra credits to meet its carbon reduction targets by adding more renewable power or energy efficiency mandates to states rather than simply reducing emissions from their existing power plants. Alternatively, the EPA provides states with other compliance options such as implementing a carbon tax or regional cap-and-trade.

In these instances, the EPA is not just regulating the emissions of a single source, but re-engineering America’s energy economy and thus interfering with decisions that the private sector should undertake and that should be regulated largely at the state and local levels. Rather than simply setting reduction targets, the administration continues to favor its preferred energy sources while driving other sources out of production.

Pushing Back Against EPA

As the states challenging the EPA have warned, the EPA would have “the unilateral authority to end the use in this country of certain kinds of energy generation.” Nearly 40 percent of America’s electricity comes from coal-fired power plants, and another 500 years’ worth of coal (at current consumption rates) lies underneath the country’s soil. The EPA’s regulations on new and existing power plants would go a long way toward taking that energy offline.

The regulations will drive costs higher for all Americans.

Not only would the administration’s climate agenda decimate coal country, but the regulations will drive costs higher for all Americans. Families will feel the pain of higher energy prices not only directly, but also indirectly through increases in the costs of almost all of the goods and services they buy, because energy is a necessary component of production and service. Companies will pass higher costs on to consumers or absorb the costs, which prevents hiring and new investment.

The result is fewer opportunities for American workers, lower incomes, less economic growth, and higher unemployment. The regulations that increase energy prices would disproportionately eat into the income of the poorest American families, who spend a larger portion of their budget on energy costs.

The decision also has implications for the Paris Protocol agreement reached at the United Nations climate conference in December. Countries will likely react with more skepticism regarding the U.S.’s commitment to reduce greenhouse gas emissions if the core of Obama’s climate agenda is thrown out in court.

Overall, the decision to stay the plan’s implementation pending the outcome of the legal challenge is a welcome one for everyone concerned with a rogue agency unilaterally transforming America’s energy sector, which would consequently drive prices higher.