Fact Check: Did Obamacare Have a Record Number of Sign-Ups for 2018 Open Enrollment? 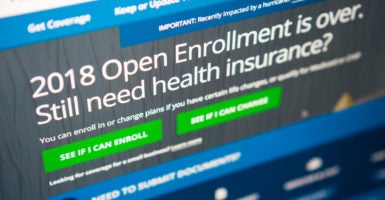 “Obamacare is more popular now than it’s ever been,” Hodge said. “We’ve seen record sign-ups during the open enrollment period, that the Trump administration actually cut funding for and shortened the enrollment period.”

The total number of sign-ups on HealthCare.gov during the 2018 open enrollment period is lower than previous years, although the pace of sign-ups was faster.

About 8.8 million people signed up for 2018 health coverage on HealthCare.gov during this year’s open enrollment period ending Dec. 15, compared to 9.2 million sign-ups for 2017 coverage and 9.6 million for 2016 coverage.

HealthCare.gov provides Affordable Care Act individual health plans in 39 states. The remaining 11 states and the District of Columbia run state health exchanges, and may have later deadlines to sign up than the federal deadline. Total enrollment for Obamacare plans won’t be known until all exchanges are accounted for, but enrollment on state exchanges also lags behind previous years.

The New York Times claimed the 8.8 million number is surprising since President Donald Trump’s administration cut HealthCare.gov’s advertising budget by 90 percent and shortened the enrollment period to around 45 days, half the length as the 2017 enrollment period.

“It’s incredible how many people signed up for coverage this year,” Lori Lodes, a former Obama administration official and a founder of Get America Covered, told The New York Times.

Enrollment for 2018 did outpace the rate of sign-ups from prior years. More people signed up for plans on HealthCare.gov in the first week of the open enrollment period than in previous years, with more than 600,000 people selecting plans. In the final week, 4.1 million people signed up for coverage or were automatically renewed.

When asked to clarify his statement, Hodge said he was referencing the pace of sign-ups. “The pace of sign-ups were faster given the shorter enrollment period and the enrollments in the last week were likely the biggest on record,” Hodge told The Daily Caller News Foundation in an email. He did not say whether he would amend his on-air statement to clarify there was not a record number of total sign-ups.

Premiums for health plans offered on HealthCare.gov skyrocketed for 2018, due in part to the Trump administration eliminating cost-sharing payments to insurance companies. Premiums for the second-cheapest silver plan increased 37 percent from an average of $300 per month to $411 per month. Low-income Americans will get larger subsidies because of the price increase.

The new tax reform law repealed the individual mandate provision in the Affordable Care Act that required every American to have health insurance coverage or pay a fine. Republicans in Congress are deciding whether to continue with Obamacare repeal and replace efforts in 2018 or move on to other priorities.