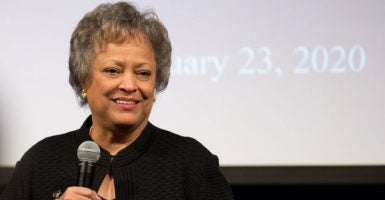 "Part of what I want to do is help both sides of the aisle … understand the significance of historically black colleges and universities,” Heritage Foundation President Kay C. James says Thursday in opening a forum on the future of the schools. (Photo: Willis Bretz for The Heritage Foundation)

Welcoming participants in a daylong forum on the future of historically black colleges and universities, Heritage Foundation President Kay C. James spoke Thursday of her personal experience growing up in the segregated South and receiving an education amid racism and discrimination.

James went on to top positions in state and federal governments, as well as the private sector, after graduating from Hampton University, which she teasingly emphasized is “the university” in off-the-cuff opening remarks, prompting laughter.

“It was the best decision I ever made,” she said of enrolling at the historically black school in Hampton, Virginia.

The Historically Black Colleges and Universities Forum, held at Heritage’s headquarters on Capitol Hill, attracted academic, military, and business leaders as speakers and panelists on the subject to discuss the advance of such schools, identified in U.S. law as HBCUs.

The forum focused in particular on global competitiveness and military preparedness, including incorporating more military programs for the benefit of the nation’s armed forces as well as students.

Before introducing James, Angela Sailor, vice president of the think tank’s Edwin Feulner Institute, said Heritage seeks to improve America across the board, and that one way to accomplish that goal is by engaging leaders from historical institutions and helping to improve them.

A working group on HBCUs assembled last May and its work culminated in the day’s forum, Sailor said.

James said that as the first woman and first black to head what University of Pennsylvania researchers rank as the “most impactful” think tank in the world, she had a special obligation.

“One of the worst abuses of power is to have it and not use it for good,” she said.

James, also the founder of Gloucester Institute in Virginia, briefly recalled the hostility she encountered as part of the first class to integrate a middle school in Richmond, Virginia.

“I had to walk past dogs, and police officers, and screaming parents saying, ‘We don’t want you here,’” James recalled.

Her previous good grades turned to Cs and Ds, she said, as school teachers and administrators resisted integration in hopes that black students would go back to their old schools.

“After two years of middle school and four years of high school, with the opportunity to go anywhere at that point, I wanted the safety, the nurturing, the caring of an institution who cared about me, who knew my special needs, who knew what I had been up against, and who cared deeply about my success,” she said, adding:

And when I stepped onto the campus of the university, I was met with love. I was met with a team of administrators who cared deeply about my success. I was met with teachers who understood my struggle. It was the best decision I ever made, to go to an HBCU.

James said it occurred to her after she became Heritage president in December 2017 that strengthening historically black schools would help make it possible for others to attain influential platforms, just as she had.

“And so, part of what I want to do is help both sides of the aisle … understand the significance of historically black colleges and universities,” James said. “We need them to understand that these institutions must survive, because there are kids out there who desperately need what I needed. And so I am grateful for your presence here today, I am grateful for the commitment you made to be here,  and the work lies ahead.”

Commitment to U.S. military strength is a bipartisan issue too, James said. She recalled that a friend, a Marine Corps general who belongs to a different political party, told her that one of the worst things to happen to young black men was to exclude ROTC and other military programs from many campuses.

“Anything we can do to reconnect and make that partnership stronger I think is a good thing,” James said.