How Top Think Tanks Are Maintaining Their Influence 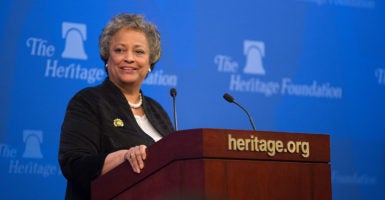 Heritage Foundation President Kay Coles James says, "Think tanks play a key role in determining which ideas win and which ones are consigned to the dustbin.” (Photo: Willis Bretz for The Daily Signal)

The way Americans consume facts and information has been significantly disrupted over the past decade, but think tanks have maintained a place of relevance and influence in policymaking.

That’s the conclusion of the University of Pennsylvania’s newly released 2018 Global Go-To Think Tank Index. The annual rankings were unveiled Thursday at the Brookings Institution in Washington.

For the second consecutive year, The Heritage Foundation ranked No. 1 for global impact on public policy. Heritage also topped this year’s list for best use of the internet. The Daily Signal is Heritage’s multimedia news organization.

The index tracks more than 8,100 think tanks from around the world. The annual rankings are the result of input from 3,750 journalists, policymakers, public and private donors, and other specialists.

Jim McGann, director of the Think Tanks and Civil Societies Program at the University of Pennsylvania, told The Daily Signal he’s not surprised to see Heritage top the list for impact once again in this year’s index.

McGann explained that for many years Heritage has asked the question, “How do you engage policymakers in a way that meets them where they are at?” From its founding in 1973, McGann said Heritage created “a fundamental shift” among think tanks.

“That is the genius and success of Heritage and why it has become so influential,” McGann said.

At Thursday’s event, six think tank leaders from around the world shared their insights on why facts are still important today and how think tanks can stay relevant in an ever-changing policy and media landscape.

In his opening remarks, McGann said, “There is a digital divide among think tanks. Those that get it and those that don’t, and that will be a significant and important element in terms of the success and impact of think tanks going forward.”

A strong communications team and digital presence across media platforms became the most consistent theme discussed during the panel presentation.

Paul Salem, president of the Middle East Institute, spoke directly to this need for digital engagement. He said the primary work of a think tank is using all communication channels in an effective and impactful way.

Salem explained this challenge by noting, “the more a think tank is doing its work properly, the bigger the challenge is to reboil that [research] down to something—whether a one-pager that a policymaker will read or a tweet that 60,000 people might see, or a one-minute video.”

In a statement Thursday, Heritage Foundation President Kay Coles James concluded, “Ideas shape who we are, how we live, and how we are governed. Think tanks play a key role in determining which ideas win and which ones are consigned to the dustbin.”