Kay Coles James to Lead The Heritage Foundation as Next President 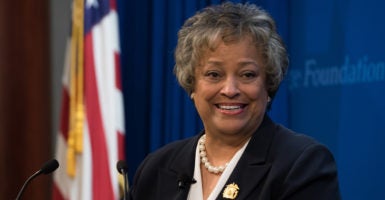 Kay Coles James, a conservative leader with experience in government, academia, and public policy, will be the next president of The Heritage Foundation, the think tank announced Tuesday.

I look forward to expanding the conservative movement in a positive, inclusive way as we build an America where freedom, opportunity, prosperity, and civil society flourish.

Heritage’s board of trustees unanimously elected James after an extensive search, said Thomas A. Saunders III, the board’s chairman.

“All of us at Heritage are looking forward to continuing working with Kay Coles James developing and advancing conservative policy solutions and principles that are in the best interest of the American people,” Saunders said in a statement.

Over the course of her 30-year career, James has served in government, academia, and the private sector. Her roles include director of the Office of Personnel Management under President George W. Bush, a senior member of President Donald Trump’s transition team, Virginia’s health secretary under Gov. George Allen, and dean of the School of Government at Regent University. She currently leads the Gloucester Institute in Virginia.

“For more than four decades, The Heritage Foundation has been a vital force in American conservatism, producing the research, analysis, and solutions that inform and influence policymaking,” James said. “I’m honored that the board would ask me to lead this important work. What we believe, what we develop, what we fight for—these are the policies that help people. I look forward to expanding the conservative movement in a positive, inclusive way as we build an America where freedom, opportunity, prosperity, and civil society flourish.” James is the sixth president in Heritage’s 44-year history, although she is no stranger to its work. Since 2005, she’s served on Heritage’s board of trustees. She also led the search committee for the new president until she was identified as a candidate.

“The board’s search committee is grateful for the input of The Heritage Foundation’s members, staff, and supporters throughout the search process. Their insights were extremely helpful as we interviewed and evaluated extraordinarily talented candidates,” said former Attorney General Edwin Meese III, a member of Heritage’s board and chairman of the search committee. “We are very pleased that our work resulted in the selection of Kay Coles James.” James has published several commentaries for The Daily Signal. They include:

The Heritage Foundation is a nonprofit, nonpartisan research institute founded in 1973. In 2014, it created The Daily Signal as a multimedia news organization.