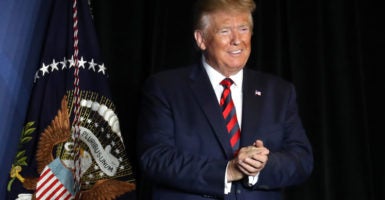 The United States “owes a profound and enduring debt of gratitude” to its historically black colleges and universities, President Donald Trump said in an address Tuesday, at which he announced new support from his administration for the institutions.

“This meant that your faith-based institutions, which have made such extraordinary contributions to America, were unfairly punished for their religious beliefs.”

“This week, our Department of Justice has published an opinion declaring such discriminatory restrictions as unconstitutional,” the president added. “It was a big step. And from now on, faith-based HBCUs will enjoy equal access to federal support.”

According to the National Center for Education Statistics, a federal government entity, there were 102 HBCUs as of 2017. Just under 300,000 students were enrolled at such colleges that year.

In his remarks, Trump also heralded the role HBCUs played in American life, noting that Martin Luther King Jr. had graduated from Morehouse College in Atlanta.

“HBCU graduates have improved and uplifted every feature of American society,” the president said.

The president also cited how his administration had helped blacks, saying, “last month, the unemployment rate for African Americans hit yet another all-time, historic low” and “African American youth unemployment has reached the lowest rate ever recorded in the history of our country. “

Trump further noted that “the African American poverty rate also reached a new, record low in the history of our country” and that “to remedy unfair sentencing laws that disproportionately hurt African Americans,” he had signed in 2018 “groundbreaking criminal-justice reform into law, a bipartisan FIRST STEP Act.”

During the speech, Trump also referenced actions his administration had taken to help support historically black colleges and universities, including allowing Pell Grants to be used for summer classes and boosting federal funding by 13% for HBCUs.

“African Americans built this nation through generations of blood, sweat, and tears,” Trump said. “And you, like all of our citizens, are entitled to a government that puts your needs, your interests, and your families first.”