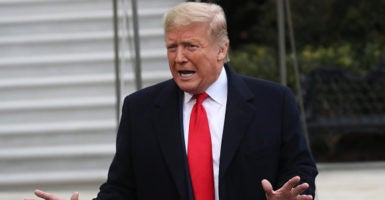 A new report to the secret FISA court evaluating the FBI's domestic spying protocols follows a scathing report from a Justice Department watchdog on how the FBI got the court's approval to eavesdrop electronically on a Trump campaign aide in 2016. Pictured: President Donald Trump speaks to reporters Monday before departing from the White House. (Photo: Mark Wilson/Getty Images)

A former Obama administration lawyer who long defended investigating President Donald Trump’s Russian ties and spying on a campaign aide concludes in a new report that the FBI’s proposed reforms are “insufficient” to prevent abuses from occurring again.

In doing so, the FBI used an unverified opposition research document paid for by the Democratic National Committee and the Hillary Clinton campaign as the factual basis for seeking the warrant from the secret FISA court.

The FBI did not disclose the source of its information to the court. It in fact was compiled for Democrats by a former British spy, Christopher Steele, working with the opposition research firm Fusion GPS.

After release of the inspector general’s report, the FISA court on Jan. 10 appointed David Kris, a former assistant attorney general with the Justice Department’s National Security Division, to oversee reforms to the court’s process for reviewing warrant applications.

Kris last year strongly defended the FBI’s surveillance of the Trump campaign adviser, Carter Page, as well as the process prior to the release of the inspector general report.

Republicans immediately objected to the appointment of Kris earlier this month.

Kris, in his report released Wednesday, asserts that those reforms are inadequate.

“These Corrective Actions point in the right direction, but they do not go far enough to provide the Court with the necessary assurance of accuracy, and therefore must be expanded and improved,” Kris writes.

Trump had tweeted his objections to the Kris appointment Jan. 12.

“You can’t make this up! David Kris, a highly controversial former DOJ official, was just appointed by the FISA Court to oversee reforms to the FBI’s surveillance procedures,” Trump tweeted. “Zero credibility. THE SWAMP!”

Republican lawmakers also weighed in at the time of Kris’ appointment.

However, Kris came out with a fairly strongly worded 15-page report Wednesday, writing at one point: “The FBI’s recent failures … are egregious enough to warrant serious consideration of significant reform.”

Here are some highlights of the report.

The inspector general report identified 17 “significant inaccuracies and omissions” by the FBI in its application for warrants to surveil Page.

The Justice Department’s Office of Intelligence currently conducts oversight reviews of applications for FISA warrants, but only after the fact.

Internal oversight must be closer to real time, the Kris report states.

“One of the most challenging aspects of the current accuracy reviews concerns their ability to detect errors of omission rather than commission in a FISA application,” he writes, adding:

The difficulty appears to be that searching for errors of omission, in which the material facts were known but not documented in the FISA application or internal accuracy files, is extremely resource-intensive, particularly for reviewers who did not themselves participate in the underlying investigation.

It may, for example, require interviewing FBI witnesses, some of whom may be geographically dispersed by the time of the review. But as the government concedes, and the Inspector General’s report shows, this kind of in-depth review also detects errors that might otherwise go unnoticed.

The report goes on to say:

The Court should require the government to conduct more accuracy reviews, to expand those reviews, and to conduct a reasonable number of in-depth reviews on a periodic basis. The FBI and DOJ have vast resources, and they should dedicate significantly more of those resources to auditing, sufficient to ensure coverage in a reasonable percentage of cases, and perhaps a higher percentage of certain types of cases.

The inspector general’s report stated that FBI spying went beyond the FISA warrant to listen in on Page and sending an informant to talk to unpaid Trump campaign adviser George Papadopoulos.

Also spied upon, it said, were Army Lt. Gen. Michael Flynn, a high-level Trump campaign adviser who would go on to serve less than a month as Trump’s first national security adviser, and Paul Manafort, the onetime Trump campaign chairman who later was tried and convicted for unrelated financial crimes.

The inspector general’s report also stated: “Our review found that FBI personnel fell far short of the requirement in FBI policy that they ensure that all factual statements in a FISA application are ‘scrupulously accurate.’”

Checklists won’t replace a needed change of culture at the FBI, the report says.

“A culture of operational personnel who feel checked and second-guessed by distant compliance officers is far less effective than a culture in which operators themselves are made to feel like compliance officers, with direct responsibility and accountability for following the rules,” Kris writes.

“The Court should require the government to provide an appropriate briefing on these disciplinary reviews and results to ensure that Wray’s pledge is carried out.”

3. What the Court Can Do

The report largely calls for the judiciary to assert itself in the FISA process, where historically most warrant applications are approved.

The judiciary is limited in its capacity to investigate the Justice Department, Kris notes in the report. But he adds that the Supreme Court allows courts to “exact such assurances as they deem necessary … in making probable cause determinations.”

The report cites the Supreme Court opinion in the 1978 case of Franks v. Delaware: “[W]hen the Fourth Amendment demands a factual showing sufficient to comprise ‘probable cause,’ the obvious assumption is that there will be a truthful showing.”

“There can be no dispute about the legal, ethical, and practical reasons why the government must adhere to a strict duty of candor and accuracy before the Court,” the report says.

FISA court judges generally are deferential to the FBI, determining whether the evidence justifies a warrant but not scrutinizing the accuracy of the evidence.

Kris contends in his report that judges’ oversight is “very likely at or near their lowest ebb when it comes to measures designed to ensure the basic factual accuracy and integrity of FISA applications.”

He argues that this would not be judicial overreach in telling an executive branch agency how to do its job.

The report states that “no specific question of separation of powers is presented here and now.”

Among the reforms Wray proposed to make in the FBI’s applying for warrants to surveil someone under the law is a “checklist to be completed by FBI personnel during the drafting process to ensure that all relevant information regarding a source’s reliability, including the bias or motivation of the source, as well as the accuracy or basis of a source’s reporting, is provided to 01 [the Office of Intelligence within the National Security Division of the Justice Department].”

However, Kris notes the FBI doesn’t offer a timeline for when it will complete such a checklist.

“The government does not appear to have committed to a timeline for completing this checklist or for reporting on the status of its efforts to the Court,” the report states.

Given the lessons of [the inspector general’s findings], for example, it makes sense to emphasize the ‘need to err on the side of disclosure,’ to ‘elicit information that may undermine probable cause,’ and to provide ‘all information … bearing on the reliability’ of a confidential human source. These reforms are not alone sufficient, but reforms of this sort are clearly necessary.

Among Wray’s reforms is requiring that “attorneys and supervisory attorneys in 01 [the Office of Intelligence] work closely with the case agent or agents … to elicit, articulate, and provide full factual context.”

This would mean that FBI field agents would work directly with headquarters in consulting on this kind of surveillance warrant. Currently, only headquarters signs off on such warrants.

Kris approves of this concept, but says he thinks it needs more enforcement:

It puts primary responsibility on the parties most knowledgeable about the relevant facts and therefore best equipped to prepare a complete and accurate FISA application. For this reason, it is capable of preventing both errors of commission (materially false assertions in an application) and of omission (failing to include material information in an application).  …

Even if field agents do not serve as declarants in some or all FISA applications, the Court should require them in appropriate cases to sign or otherwise attest to the Court directly with respect to asserted facts within their purview.

Wray proposed new training techniques for FBI employees involved in actions under the Foreign Intelligence Surveillance Act. The FBI director said this would include refreshing staff on the process, while also running through case studies.

The FISA court should monitor the progress, Kris concludes:

Over time, the Court should require the government to report on the training, including participation rates, and the results of testing of student knowledge. It could, for example, require quarterly reporting on these data. … The Court should also (absent extraordinary circumstances and a sound explanation) forbid agents who have not successfully completed the training from serving as FISA declarants or factual verifiers.