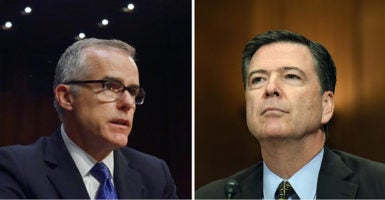 The Justice Department’s in-house watchdog released a 476-page report Monday that criticizes some of the FBI’s actions in beginning an investigation of the Trump campaign’s connection with Russian election meddling, but does not concludes that political bias drove the agency’s probe.

Attorney General William Barr, Horowitz’s boss, issued a statement Monday saying that the report shows the FBI’s “clear abuse” of the process for obtaining warrants to spy on Americans.

The IG report concludes that “the quantum of information articulated by the FBI to open the individual investigations on Papadopoulos, Page, Flynn, and Manafort in August 2016 was sufficient to satisfy the low threshold established by the [Justice] Department and the FBI.”

Mueller determined in his final report released in April 2019 that there was no evidence either Trump or his campaign conspired with the Russian government or Russian operatives to influence the 2016 election.

2. FBI ‘Far Short’ on Facts in Applying for Warrant

On one key matter, the IG report scolds the FBI for “falling far short” on standards.

The report identifies 17 “significant inaccuracies and omissions” by the FBI, which it subsequently refers to as “errors,” in obtaining a warrant to surveil Page under the Foreign Intelligence Surveillance Act, known as FISA.

“Our review found that FBI personnel fell far short of the requirement in FBI policy that they ensure that all factual statements in a FISA application are ‘scrupulously accurate,’” the report says. “We identified multiple instances in which factual assertions relied upon in the first FISA application were inaccurate, incomplete, or unsupported by appropriate documentation, based upon information the FBI had in its possession at the time the application was filed.”

The inspector general also “determined that the inaccuracies and omissions we identified in the applications resulted from case agents providing wrong or incomplete information to Department attorneys and failing to identify important issues for discussion.”

Further, the report notes that “among the most serious” errors committed by the FBI on FISA was the “failure to advise OI [the Office of Intelligence] or the court of the inconsistencies.”

The Office of Intelligence is part of the Justice Department’s National Security Division.

3. No ‘Documentary or Testimonial Evidence’ of Political Bias, but …

On the question of political bias by FBI agents and officials, Horowtiz’s report appears to throw a bone to both sides by making a scathing assessment but asserting on each evaluation that his investigators didn’t find “documentary or testimonial evidence” of impropriety.

“We did not find documentary or testimonial evidence that political bias or improper motivation influenced the decisions to open the four individual investigations,” the IG report says.

Later, when describing the process of obtaining a surveillance warrant under FISA, the report uses the same phrase:

Although we did not find documentary or testimonial evidence of intentional misconduct on the part of the case agents who assisted NSD’s Office of Intelligence … we also did not receive satisfactory explanations for the errors or missing information. We found that the offered explanations for these serious errors did not excuse them, or the repeated failures to ensure the accuracy of information presented to the FISC [Foreign Intelligence Surveillance Court].

The report says a protocol known as the Woods Procedures, adopted in 2001, requires the FBI to verify facts presented in a FISA application to the Foreign Intelligence Surveillance Court, whose proceedings are secret.

“As described above, given that certain factual misstatements were repeated in all four applications, across three different investigative teams, we also concluded that agents and supervisors failed to appropriately perform the Woods Procedures on the renewal applications by not giving much, if any, attention to re-verifying ‘old facts.’”

This section of the IG report is mostly consistent with a memo released in early 2018 by then-House Intelligence Chairman Devin Nunes, R-Calif., which said the FBI did not comply with the Woods Procedures.

4. Why the FBI Says It Didn’t Notify Trump

Horowitz’s report says that an FBI counterintelligence official, E.W. “Bill” Priestap, told investigators that the hacking of Democratic National Committee computers created an obligation to investigate members of the Trump campaign who had potential ties to Russia.

Priestap had an explanation for why the FBI never notified the Trump campaign that it was looking into potential wrongdoing, the report says:

Priestap stated that he considered whether the FBI should conduct defensive briefings for the Trump campaign but ultimately decided that providing such briefings created the risk that ‘if someone on the campaign was engaged with the Russians, he/she would very likely change his/her tactics and/or otherwise seek to cover up his/her activities, thereby preventing us from finding the truth.’

5. Comey, McCabe, and the Steele Dossier

The IG report says that top FBI leadership approved use of unverified information in a so-called dossier assembled by a former British spy, Christopher Steele, to apply for the warrants.

However, a lower-level FBI official raised red flags that Steele’s document was paid for by Hillary Clinton and the Democratic National Committee.

“We further determined that FBI officials at every level concurred with this judgment, [including] then-General Counsel James Baker, then-Deputy Director Andrew McCabe, and then-Director James Comey,” the report says, referring to basing the warrant application on the unverified information:

FBI leadership supported relying on Steele’s reporting to seek a FISA order on Page after being advised of, and giving consideration to concerns expressed by Stuart Evans, then [the National Security Division’s] Deputy Assistant Attorney General with oversight responsibility over [the Office of Intelligence], that Steele may have been hired by someone associated with presidential candidate Clinton or the DNC, and that the foreign intelligence to be collected through the FISA order would probably not be worth the ‘risk’ of being criticized later for collecting communications of someone (Carter Page) who was ‘politically sensitive.’

According to McCabe, the FBI ‘felt strongly’ that the FISA application should move forward because the team believed they had to get to the bottom of what they considered to be a potentially serious threat to national security, even if the FBI would later be criticized for taking such action.

In a statement also released Monday, U.S. Attorney for the District of Connecticut John Durham, who is conducting a criminal investigation of the origins of the Trump-Russia probe, disagreed with some of the IG report’s findings.

“I have the utmost respect for the mission of the Office of Inspector General and the comprehensive work that went into the report prepared by Mr. Horowitz and his staff,” Durham said. “However, our investigation is not limited to developing information from within component parts of the Justice Department.”

Our investigation has included developing information from other persons and entities, both in the U.S. and outside of the U.S. Based on the evidence collected to date, and while our investigation is ongoing, last month we advised the Inspector General that we do not agree with some of the report’s conclusions as to predication and how the FBI case was opened.

Indeed, questions about what the FBI predicated its case on include actions by officials with the CIA, the National Security Council, and the Office of the Director of National Intelligence.

The IG report, however, says that nearly all of its information came from sources within the FBI, as it is not authorized to investigate matters outside the Justice Department:

The question we considered was not whether a particular investigative decision was ideal or could have been handled more effectively, but rather whether the [Justice] Department and the FBI complied with applicable legal requirements, policies, and procedures in taking the actions we reviewed or, alternatively, whether the circumstances surrounding the decision indicated that it was based on inaccurate or incomplete information, or considerations other than the merits of the investigation.

If the explanations we were given for a particular decision were consistent with legal requirements, policies, procedures, and not unreasonable, we did not conclude that the decision was based on improper considerations in the absence of documentary or testimonial evidence to the contrary.

Barr, who as attorney general is the boss of both Horowitz and Durham, issued a statement saying the report reveals “clear abuse” of the FISA process.

“The Inspector General’s report now makes clear that the FBI launched an intrusive investigation of a U.S. presidential campaign on the thinnest of suspicions that, in my view, were insufficient to justify the steps taken,” Barr said in the statement, adding:

It is also clear that, from its inception, the evidence produced by the investigation [of Trump campaign ties to Russia] was consistently exculpatory.  Nevertheless, the investigation and surveillance was pushed forward for the duration of the campaign and deep into Preisident Trump’s administration.

In the rush to obtain and maintain FISA surveillance of Trump campaign associates, FBI officials misled the FISA court, omitted critical exculpatory facts from their filings, and suppressed or ignored information negating the reliability of their principal source.