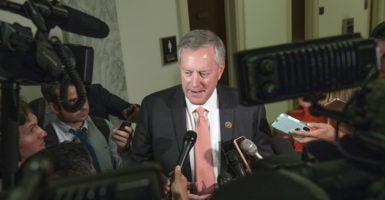 Pictured is Rep. Mark Meadows as he answers reporter's questions on Capitol Hill in Washington, D.C., on June 27. Meadows, a member of the Oversight and Government Reform Committee, responded to Lisa Page’s decision, calling it “indefensible.” (Photo: Ron Sachs/SIPA/Newscom)

Former FBI attorney Lisa Page will defy a congressional subpoena to appear for a deposition on Wednesday, her lawyer said in a statement.

The House Judiciary and House Oversight and Government Reform committees issued the subpoena to Page, who has been at the center of controversy over anti-Trump text messages that she exchanged with Peter Strzok, the former deputy chief of the FBI’s Counterintelligence Division.

Page and Strzok worked on the Hillary Clinton email investigation as well as the probe into possible collusion between the Trump campaign and the Russian government.

Strzok is slated to testify in a public hearing before the two congressional committees on Thursday.

Page’s lawyer, Amy Jeffress, said her client has not had enough time to prepare for an interview. She also complained that the committees failed to respond to requests “to explain the scope of the interview.”

“The committees would be asking Lisa about materials that she has not yet been shown,” Jeffress said.

She also said she accompanied Page to FBI headquarters on Tuesday to review materials needed for a congressional appearance. But she said in her statement that “after waiting for more than three hours, we were not provided with any documents.”

“We have asked the committees to schedule another date that would allow sufficient time for her to prepare,” she continued. “The committees have not honored this request. As a result, Lisa is not going to appear for an interview at this time.”

Page resigned from the FBI on May 4. Strzok remains at the bureau’s human resources division but was recently stripped of his security clearance.

If Page does eventually appear before Congress, she will likely be asked about her role in deciding not to press charges against Clinton for using a private email server to maintain classified documents. She would also likely face questions about her text exchanges with Strzok, with whom she was having an affair.

The text messages show that Page and Strzok referred to Trump as an “idiot” and lamented his political success.

Other text messages showed the pair discussing how to handle the Russia investigation.

This statement from Lisa Page's attorneys could've been better summed up in one short sentence: "We're choosing to ignore a Congressional subpoena"