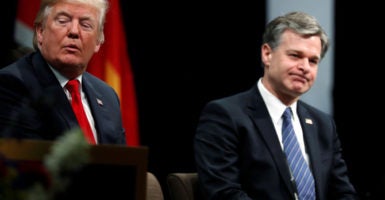 A legal watchdog is pressing the Justice Department in court for documents that could allow Americans to decide for themselves whether politically motivated FBI officials compromised the bureau’s investigations of Hillary Clinton’s email habits and Russian election meddling.

Judicial Watch, a conservative but nonpartisan foundation based in Washington, filed a Freedom of Information Act lawsuit Jan. 24 against the Justice Department, seeking electronic text messages between two FBI officials in which they expressed hostility toward Donald Trump and enthusiasm for Clinton during the 2016 presidential campaign.

The next day, Fox News reported that the department’s inspector general had used “forensic tools” to recover hundreds of text messages between the FBI officials that had gone missing.

Attorney General Jeff Sessions, who heads the Justice Department, has said that Lisa Page, an FBI lawyer, and Peter Strzok, then chief of the FBI’s counterespionage section while investigating the Clinton email scandal, exchanged more than 50,000 text messages when they reportedly were having an extramarital affair.

Judicial Watch filed suit after the Justice Department, which includes the FBI, declined to respond to its Dec. 4, 2017, request under the Freedom of Information Act asking for all records of communications, including emails, text messages, and instant chats, between Strzok and Page from Feb. 1, 2015, to the present.

Sen. Ron Johnson, R-Wis., chairman of the Homeland Security and Governmental Affairs Committee, has released copies of Page-Strzok text messages that the Justice Department turned over in response to requests from both Johnson and Sen. Charles Grassley, R-Iowa, chairman of the Judiciary Committee.

Johnson’s committee received a “first tranche” of the Page-Strzok text messages Dec. 12 and a “second tranche” Jan. 19, staff members explain in a just-published report, “The Clinton Email Scandal and the FBI Investigation of It.”

The report points out that the second batch came with a notice that text messages between the two FBI officials “sent and received between Dec.14, 2016, and May 17, 2017, had not been preserved due to technical problems.” Now that Inspector General Michael Horowitz has recovered the missing text messages, however, Johnson’s committee is “working to obtain those message as soon as possible.”

The dates of the Page-Strzok text messages originate Aug. 21, 2015, just weeks after Trump announced his candidacy for president, and run through June 25, 2017, six months into Trump’s presidency, according to the records Johnson’s committee has published online.

Judicial Watch is working to obtain its own copies of released text messages, as well as the unreleased, previously “missing” ones.

Tom Fitton, president of Judicial Watch, has expressed skepticism that the texts actually were missing.

“The IRS told us that [IRS official] Lois Lerner’s emails were ‘missing,’ and we forced them to admit they existed and deliver them to us, Fitton said in a press release, adding:

The State Department hid the Clinton emails, but our FOIA lawsuits famously blew open that cover-up. We fully intend to get the ‘missing’ Strzok and Page documents. And it is shameful the FBI and DOJ have been playing shell games with these smoking gun text messages. Frankly, FBI Director [Christopher] Wray needs to stop the stonewalling.

Judicial Watch filed a separate lawsuit Feb. 2 against the Justice Department, asking for FBI documents related to the warrant application the FBI submitted Oct. 21, 2016, to the Foreign Intelligence Surveillance Court.

Judicial Watch filed this second suit suit after the Justice Department rejected a Freedom of Information Act request made July 19, 2017.

The legal watchdog had asked for copies of “all proposed and all final signed FISA [Foreign Intelligence Surveillance Act] applications submitted to the FISC [Foreign Intelligence Surveillance Court] relating to Russian interference in the 2016 election, allegations of collusion between people associated with the Trump campaign and Russia, and any known Trump associates regardless of context.”

The texts between Strzok and Page first came to light as the Justice Department’s Office of Inspector General conducted an internal review of the FBI’s investigation of Clinton’s use of a private email server to conduct official business as secretary of state from 2009 through 2012.

This five months of missing messages, between Dec. 4, 2016, and May 17, 2017, cover the transition from the Obama administration to the Trump administration, Trump’s inauguration Jan. 20, and nearly four full months of his presidency.

During this period, Trump fired national security adviser Michael Flynn and, in early May, FBI Director James Comey. His Justice Department also appointed Robert Mueller, himself a former FBI director, as special counsel to investigate allegations that Russia meddled in the 2016 election campaign and that Trump campaign associates colluded with Russian officials in such meddling.

As chief of the FBI’s counterespionage section, Strzok was in charge of the agency’s investigation of Clinton’s unauthorized use of a private email server, which resulted in Comey’s announcement July 5, 2016, that she would not be charged.

Strzok then became deputy assistant director of the counterintelligence section before joining Mueller’s team probing the allegations of Russian election interference and collusion with the Trump campaign.

Mueller removed Strzok from the team last July after learning of the text messages.

Page, the FBI lawyer, also served on Mueller’s investigative team, but she had returned to other duties by the time the inspector general probe uncovered her text messages with Strzok.

Because Strzok and Page were “key investigators in the Clinton email and Trump Russia collusion investigations,” Judicial Watch argues, their text messages containing “pro-Clinton” and “anti-Trump” statements are of public interest.

The watchdog notes that Strzok reportedly oversaw the FBI’s interviews of Flynn; changed Comey’s language describing Clinton’s email practices from “grossly negligent” to “extremely careless;” and played a lead role in the FBI’s interview of Clinton about those practices.

Also, it says, Strzok “is suspected of being responsible” for the Obama Justice Department’s use of unverified information about Trump’s Russian connections “to obtain a FISA [Foreign Intelligence Surveillance Act] warrant in order to spy on President Trump’s campaign.”