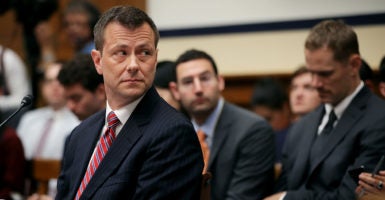 “This is censorship of facts that they want to keep hidden from the American people,” Phelim McAleer, playwright of “FBI Lovebirds: UnderCovers,” said in a press release. “And they are hiding behind ‘safety concerns’ in order to squash diversity of opinions in the theater.”

The author and former investigative journalist wrote and co-produced the play with his wife, Ann McElhinney, to tell the story of Strzok, a former FBI agent, and Page, a former FBI lawyer, whose personal texts about stopping presidential candidate Donald Trump from winning the election were a contentious issue in the FBI’s congressional testimony last summer as a part of the Trump-Russian collusion investigation.

McAleer describes the play as a “verbatim” retelling of Strzok and Page’s illicit text messages at the federal agency. The play’s website says the script combines the text messages between Strzok, played by Dean Cain, and Page, played by Kristy Swanson, with the transcript of their closed-door congressional testimony.

“These are the actual words and texts of Strzok and Page and they are shown in all their conspiratorial plots, using the power of the FBI and the intelligence services, trying to stop Trump being elected and then trying to undermine his presidency,” McAleer said.

The play was scheduled to open at Mead Theater space in the Studio Theatre complex June 13, but on May 28, the theater sent an email to McAleer and the Unreported Story Society production team revoking their booking.

“Media reports have made us aware of undisclosed details about the event,” an employee of the theater told the team, according to the press release about the film’s cancellation. The employee also cited “security concerns” as a reason for cancelling.

The Daily Signal contacted Studio Theatre for a comment regarding the cancellation. The theater sent back a public statement:

Studio Theatre has cancelled its contract with third-party rental client Unreported Story Society. Media reports have made us aware of undisclosed details about the event. Additionally, there have been open and violent threats made against the theater and event participants. Studio has an institutional responsibility to consider the safety of our staff, patrons, community, event organizers, and attendees. These concerns must be paramount.

McAleer says the show will go on. Once he finds another venue for the play, it will be broadcasted on YouTube afterwards.

“We will get a venue,” McAleer said. “The staged reading will go ahead. It will be filmed and released online and everyone will get to see the truth about how the upper echelons of the FBI tried to subvert democracy. This censorship will not succeed.”

McAleer and McElhinney are crowdfunding the play as they have done for the majority of their previous productions. They have produced multiple films, most recently “Gosnell: The Trial of America’s Biggest Serial Killer,” about an abortion doctor convicted of murdering three infants who had been born alive during attempted abortions, and whose crimes local law enforcement tried to cover up.

This article has been corrected to reflect that “FBI Lovebirds” was only scheduled for one night, and was a reading, not a showing. The name of the theater employee has also been removed, at the request of the theater.