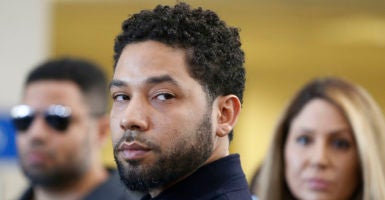 Jussie Smollett claimed that while wandering the street during one of 2019's coldest nights, he bumped into two men who attacked him, claiming Chicago was "MAGA country." (Photo: Nuccio DiNuzzo/Getty Images)

In the you-just-can’t-make-this-stuff-up category, we interrupt the impeachment proceedings to return to the Jussie Smollett drama.

The latest head scratcher is the fact that Smollett has filed a two-count counterclaim against the city of Chicago, claiming malicious prosecution. That’s right.

Smollett is suing the city for malicious prosecution because he filed a bogus police report about a hate crime that didn’t happen, and in spite of the fact that Cook County prosecutor Kim Foxx let him off the hook for it. That’s gratitude for you.

A quick refresher on the facts is helpful. Last January, Smollett says he received a letter at the television studio where the show “Empire” is filmed, and the letter contained white powder, had a stick figure hanging from a tree, with cutout letters saying, “Smollett Jussie you will die black [expletive].”

Smollett told an ABC News crew that the return address on the letter said MAGA, a reference to the “Make America Great Again” Trump moniker. That case was turned over to the FBI, but we don’t know what, if anything, the feds have decided to do about that allegation.

A week later, Smollett claimed that while he was walking home at 2 a.m., “two offenders who engaged in racial and homophobic slurs” assaulted him, poured a liquid on him, put a rope around his neck, and pulled him by the rope.

According to a lawsuit filed against him by the city of Chicago, Smollett identified at least one of his attackers as a white man.

The allegations fell apart quickly when the police investigated the case. It turned out that Smollett’s alleged attackers were not white, but black.

The men were two brothers from Nigeria whom Smollett knew. He had paid them $3,500 for, what he called, “personal training,” but according to the brothers, Smollett actually paid them to stage the attack because he was unhappy that his previous attempt to stage a threat against himself (with a fake letter) didn’t get him much attention.

Smollett was eventually indicted on 16 related disorderly conduct offenses for making up the entire affair. Foxx, who was in charge of the office prosecuting Smollett, announced that she would recuse herself from the case because she had conversations with one of Smollett’s relatives about the investigation.

Later, however, Foxx announced that she had not really recused herself, and she subsequently dropped all charges against Smollett. She gave him a sweetheart plea deal: He was allowed to walk away from the case without admitting guilt, he forfeited his $10,000 bond, he was given credit for 16 hours of community service, and his case was sealed.

Chicago’s mayor-elect, Lori Lightfoot, supported the deal, saying, “This doesn’t rank as a matter of any importance to me.”

Others, us included, thought that something wasn’t right about the plea deal, and called for an investigation into this suspicious miscarriage of justice. The Illinois Prosecutors Bar Association, for example, called it “highly unusual” and not representative of the “honest ethical work” prosecutors are supposed to provide on a daily basis.

The city of Chicago then sought reimbursement for the $130,106 it spent investigating the hoax. When Smollett refused to pony up the money, they sued him in federal court.

Smollett’s attorneys tried to get the case tossed out, but U.S. District Court Judge Virginia Kendall said last month, “This will be going forward.” The next hearing in federal court is Feb. 18, 2020.

Meanwhile, in Illinois state court, a Cook County judge appointed a special prosecutor to look into the entire fiasco, including how and why the Cook County State’s Attorney’s Office came to offer Smollett the deal of the century.

Smollett got off a lot easier than he should have, but his counterclaim against Chicago shows he’s committed to pretending that he was the victim in this docudrama.

Smollett was booted from the last season of “Empire” as a result of his false allegations. This may be the only drama he can star in, for now.