Iran Hijacked a Ship. The White House Should Demand the Release of Ship, Crew. 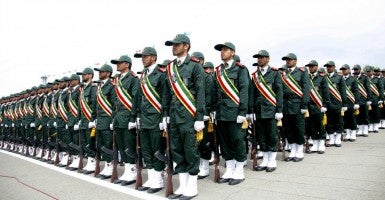 Iran’s Islamic Revolutionary Guard Corps seized a cargo ship Tuesday in the Strait of Hormuz, after first firing a shot across the bow of the ship, Maersk Tigris, registered in the Marshall Islands.

The ship issued a distress call before it was boarded, hijacked and diverted to an Iranian port.

The U.S. Navy dispatched the destroyer USS Farragut to respond to the distress call, but it arrived too late to prevent the hijacking. Because the seizure occurred in the internationally recognized maritime passage, it essentially was an act of piracy.

But the Obama administration has downplayed the importance of Iran’s piracy, just as it has downplayed the crimes of the Islamic Republic in repressing its own people, violating their human rights and supporting terrorism against Americans and U.S. allies.

The White House is determined to push through a flawed nuclear deal with Iran despite these inconvenient truths.

The Maersk Tigris reportedly now is resting off the Iranian coast and its crew is safe according to their employer, but the circumstances under which they are being detained remains unclear.

Turning a blind eye to Tehran’s latest provocation would send a dangerous signal to Iran’s predatory regime that it can violate international law with impunity.

Iran’s semi-official Fars News Agency claimed that Iranian authorities had a commercial dispute with the owner of the ship, but even if true, that would not legally justify seizing a ship in international waters.

The more likely explanation is that the Islamic Revolutionary Guard Corps has flexed its muscles to provoke a crisis in retaliation for U.S. backing for the Saudi-led coalition that is blockading Yemen, to prevent Iran from arming and supplying Yemen’s Houthi rebels, which Tehran has backed.

Last week the U.S. deployed the aircraft carrier Theodore Roosevelt and other warships to deter an Iranian naval convoy from transporting suspected arms to a Yemeni port.

Tehran periodically has threatened to close the strait if it is attacked or its own oil exports are threatened. Closure would have dire consequences for the global economy because about 20 percent of world oil supplies are transported through the Strait of Hormuz, a vital strategic chokepoint.

The U.S. commitment to ensure the free flow of oil as well as freedom of the seas requires that Washington take a firm stand against Iranian piracy.

The White House should immediately demand the unconditional release of the Maersk Tigris and its crew.

Washington also bears a special responsibility for defending the interests of the Marshall Islands, a U.S. protectorate.

As the State Department has noted, “The United States has full authority and responsibility for security and defense of the Marshall Islands” under the terms of the Compact of Free Association with the United States.

Turning a blind eye to Tehran’s latest provocation would not only betray an ally but would send a dangerous signal to Iran’s predatory regime that it can interfere with international shipping in the strait and violate international law with impunity.

The White House must also correctly interpret the signals being sent by the Islamic Revolutionary Guard Corps, which also controls Iran’s nuclear program.

By opportunistically violating international law when it suits the interests of Iran’s regime, the Islamic Revolutionary Guard Corps once again is demonstrating its commitment to violently revising the status quo, its cold indifference to international legal agreements and its contempt for Western interests.

The White House, desperate for a nuclear deal with Iran, has mistakenly downplayed Iran’s hostile actions in supporting Islamist extremist factions in Afghanistan, Gaza, Iraq, Lebanon and Yemen, as well as propping up the Bashar al-Assad dictatorship in Syria.

But it cannot ignore the direct challenge to vital U.S. interests in the Strait of Hormuz.

If Iran violates international law and its own legal commitments in the strait, why does the administration believe that it will suddenly abandon its long-standing effort to attain a nuclear weapon?