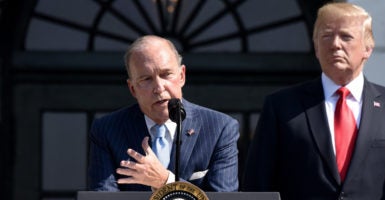 Larry Kudlow, director of the National Economic Council, said “there’s a lot of good, positive things” in Tax Reform 2.0, a package of three bills that have cleared the House. Two passed in September; the third passed Tuesday.

“These are pro-growth bills. It may be amended in the Senate and so forth. Other people may weigh in. We’re looking at things [ourselves],” Kudlow told The Daily Signal outside the White House.

“President Trump has changed the whole incentive structure in the U.S. economy with fabulous results,” he added. “We’re not fighting business. We’re not punishing success. We’re letting folks, at lower tax rates … keep more of what they earn and invest. That’s a terrific incentive.”

The new legislation would build on the 2017 Tax Cuts and Jobs Act, which slashed individual income tax rates and put corporate tax rates in line with those of other industrialized countries. Unlike the corporate rate cuts, the individual rate cuts expire in 2025.

The tax cuts have spurred employee bonuses and business expansion across the United States.

The following are the three bills:

We’ve rolled back the regulations and the red tape, so businesses can expand. They are not being strangled anymore.

Now, taxes and regulations are means to an end. The end is that mighty healthy economy and prosperity and fatter paychecks. They are tools, and the president has implemented those tools, and the economic results are showing.

I’ll go back to my Henry Kissinger quote. I don’t know if you’ve heard it or not. Henry, who was a friend and mentor, said years ago, ‘This argument has the benefit of being true.” …

Friends of mine disagree. All I ask is that we focus on the actual number, the facts right now. The facts are painting a very, very positive picture that at the beginning of the year almost nobody thought was possible. Let’s just focus on what is.

Rep. Kevin Brady, R-Texas, the chairman of the House Ways and Means Committee, touted the passage of the three tax bills.

“With the lack of coverage by the media, you may have missed the House of Representatives pass three important bills that will help ensure continued momentum from the Tax Cuts and Jobs Act,” Brady said in a statement Tuesday.

“Dubbed Tax Reform 2.0, these bills will make permanent the tax cuts for individuals and small businesses, make it easier for families to save earlier in life and more for retirement and education costs, and help new companies move from the garage to Main Street by allowing them to write off more of their startup costs,” the Texas lawmaker said.

The tax cuts signed into law by President Trump last December changed the trajectory of our economy for the better. Jobs are flowing back to our shores from overseas, manufacturing is up, wages are rising, and weekly jobless claims just hit a 49-year low.

Tax Reform 2.0 builds on this enormous success, ensuring you keep more of your hard-earned paycheck, and trust me—you’ll spend it better than Washington does—and, ultimately, begins to change the culture in Washington.

I look forward to working with the Senate to pass this important legislation.