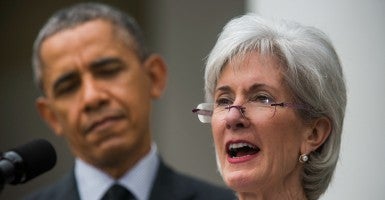 Congress and the Obama White House looked for billions of dollars a few years ago to offset the costs of a legal settlement with black farmers and American Indians,  to increase education aid to the states and to develop a vaccine for swine flu.

To get those billions, they looked to the same coffer: Project BioShield, a $5.6 billion fund created specifically to prepare America for a bioterrorist attack and develop treatments for deadly viruses such as Ebola.

Sen. Richard Burr, R-N.C., warned that the BioShield fund was not supposed to be raided as a source of “Monopoly money for politicians.”

However, a review of documents by The Daily Signal found that Congress and the Obama administration have taken or tried to take millions from Project BioShield to pay for priorities that had nothing to do with defending the nation from bioterrorism.

This year’s Ebola outbreak, which killed more than 5,500 people and saw 10 cases in the United States, sounded the alarm on Capitol Hill about whether the nation is ready to combat a virus labeled a material threat in 2006 by the Department of Homeland Security as part of Project BioShield.

And in the wake of  The Daily Signal’s report earlier this month, lawmakers led by Sen. Claire McCaskill, D-Mo., are calling for hearings to determine whether funds allocated for Project Bioshield are being used correctly — including within the range of possible bioterrorism.

Nearly half of BioShield spending has gone to combat anthrax alone, McCaskill noted during a Senate hearing last week.

“We’ve got 21 threats [identified by the Department of Homeland Security], and almost half of the money has been spent on just one of them,” McCaskill said. “How can that be justified?”

Project BioShield was the brainchild of Vice President Dick Cheney and his concern after the terrorist attacks of Sept. 11, 2001, that the United States would not have the proper defenses in the event of acts of bioterrorism. To help the country prepare, BioShield was born and became law in 2004.

The advance appropriation, later transferred to a Special Reserve Fund, expired in 2013.  To keep BioShield alive, Congress appropriated another $2.8 billion from 2014 to 2018 through the Pandemic and All-Hazards Preparedness Reauthorization Act.

In the past, pharmaceutical companies had little financial incentive to develop treatments and vaccines for deadly viruses such as Ebola. Project BioShield, though, not only provided an incentive but guaranteed a customer: the U.S. government.

>>> BioShield: Obama Diverted Funds From Its Fight Against Ebola, Other Threats

Over the years, one consistent warning from experts on the program has been the diversion of large sums from BioShield to other purposes. As The Daily Signal reported last month,, a June report from the Congressional Research Service found that Congress rescinded or transferred 40 percent of the original advance appropriation — or $2.3 billion of  $5.6 billion.

A report from the same nonpartisan agency in 2011 said: “Although advance-funding the Project BioShield account may have provided some assurance of funding stability to developers, in practice, these funds have been subject to the annual appropriations [of] Congress.”

BioShield continues to be our only viable protection/detection capability for biothreats. We desperately need to be wise on how the limited funds given to the program are used. To maximize the utility, we must include both possible terror threats and potential pandemics like Ebola. Let’s get the most bang for our buck here.

Dick Cheney championed the BioShield concept when he was vice president. (Photo: The Heritage Foundation)

In 2009, Congress transferred $137 million out of the BioShield fund to help the country prepare for a flu pandemic. One year later, lawmakers moved $304 million from BioShield to the National Institute of Allergy and Infectious Diseases for basic research.

Similarly, from 2004 to 2013, Congress transferred a total of $1.8 billion to fund development of treatments for countermeasures through BARDA, the division of the Department of Health and Human Services that oversees BioShield contracts.

In all, the government has transferred more than $2.2 billion from BioShield for research and development of chemical, radiological and nuclear countermeasures as well as biological ones and for other unrelated purposes.

However, some lawmakers and the Obama administration have sought to divert billions more.

In many instances, their requests were met with resistance.

In 2009, four years before BioShield’s advance appropriation ended, the White House asked Congress to approve a transfer of $3 billion to fund a vaccine for H1N1, or swine flu.

“Using BioShield funds for flu preparedness will severely diminish the nation’s efforts to prepare for WMD events and will leave the nation less, not more, prepared,” Graham and Talent said in a letter to Obama.

The two men, who later left the Senate, led a bipartisan group called the Commission on the Prevention of Weapons of Mass Destruction Proliferation and Terrorism, which was created in 2007.

>>> Those Ebola Vaccines in Testing Now? You Can Thank Dick Cheney for That

Graham and Talent agreed that the swine flu warranted its own funding because of the threat to public health it posed but said the money should not come from BioShield.

Industry experts also warned that diverting money from BioShield would hurt pharmaceutical companies’ ability to “sustain long-term research and development on drugs to respond to bioterror threats, for which there is no private market.”

Just months after Graham and Talent advised against raiding BioShield funds, their commission issued a report card assessing the government’s progress in protecting the public from weapons of mass destruction proliferation and terrorism.

The government got an “F” in preparedness to respond to a biological attack.

Despite this failing grade, lawmakers attempted to move funds designated for BioShield to “offset spending for other purposes.”

In July 2010, Sens. Joseph Lieberman, I-Conn., and Judd Gregg, R-N.H., joined Burr in a letter to Senate leaders objecting to a proposed rescission of BioShield money that had passed the House.

While we have made progress [in protecting from biological threats], we are still behind the curve in our ability to respond rapidly to biological threats.  The Project BioShield Special Reserve Fund was established specifically to help address this vulnerable area in our national security and must not be used as Monopoly money for politicians.

The BioShield program was meant to address these serious security shortcomings and provide assurance that the government is developing and procuring the capabilities it needs to respond effectively to a bio attack. Robbing the program of its funding would be frightfully shortsighted and would jeopardize the security of the American people against a very real and potent threat.

Lawmakers ultimately stripped the education aid provision from the legislation.

>>> ‘A Little Like a War:’ He Treated Ebola in Africa, Now Helps Prepare at Home

Months later, in November 2010, the Senate prepared to tackle legislation to make class action settlements for black farmers and American Indians. In the cases Pigford II and Cobell v. Salazar, the government agreed to pay $1.15 billion and $3.4 billion, respectively, to the two groups.

In Pigford II, black farmers argued that they faced discrimination from the Department of Agriculture. In Cobell v. Salazar, Indians contended they were wronged by the Department of the Interior through mismanagement of trust accounts.

To offset the costs of the settlement, Reid proposed taking millions from Project BioShield, among other programs, CQ reported at the time.

Three Republican senators — Chuck Grassley of Iowa, John Barrasso of Wyoming and Jon Kyl of Arizona — objected to raiding BioShield for such an unrelated purpose.

Reid said their concerns ultimately were addressed, but he accused another Republican senator, Tom Coburn of Oklahoma, of holding up the measure over its fiscal impact.

The Senate passed a bill making the settlements but did not include funds from BioShield in the final text.

Human trials of the Ebola vaccine were started in Africa after tests in the U.S. and Great Britain. (Photo: Alex Duval Smith/Newscom)

Multiple reports from the Congressional Research Service questioned how the government chose to use Project BioShield funds.

“Congressional oversight of such transfers could help ensure that [the Department of Health and Human Services] uses Project BioShield appropriations in a manner consistent with congressional intent,” the agency’s report this year said.

Similarly, a March 2010 report from the National Biodefense Science Board, commissioned at the request of its parent agency, Health and Human Services, said BioShield funds “should not be diverted to support other initiatives, regardless of the merit of other purposes.”

Most recently, the Ebola outbreak in West Africa renewed concerns among lawmakers about how Project BioShield funds are being used.

More than 5,500 have died so far of the deadly hemorrhagic fever as the disease struck in Guinea, Liberia, Sierra Leone, Nigeria, Senegal and Spain. Hospitals in the United States treated 10 patients diagnosed with Ebola from August to November, and two have died.

The outbreak raised red flags in Congress about whether hospitals and the government were prepared to respond to an influx of patients should Ebola spread rapidly.

At a hearing last week on preparedness for public health threats held by the Senate Homeland Security and Governmental Affairs Committee, McCaskill questioned the uses of BioShield money.

“We’ve spent $3.3 billion, and I’m really worried about how it’s been spent, especially in light of what we have seen with the Ebola crisis,” McCaskill said.

That’s when the Missouri Democrat noted that 44 percent of BioShield spending, almost half,  has gone to combat anthrax despite 20 other identified biothreats, including Ebola.

“How can that be justified?” she asked.

McCaskill said 10 of the 18 contracts awarded under BioShield authorizations were related to anthrax and 13 of the 18 were signed in September 2013. The original $5.6 billion advance appropriation expired at the end of that month.

“The frustrating thing from here is that this program was supposed to be identifying things like Ebola so that we’re not rushing to fund after a crisis, but rather prepared when the crisis occurs,” McCaskill said, adding:

And it looks like there was a rush to spend before the funds expired, but not to truly identify additional threats that developed, and the severity of threats that have not been addressed.