Q&A: Everything You Need to Know About Hong Kong Demonstrations 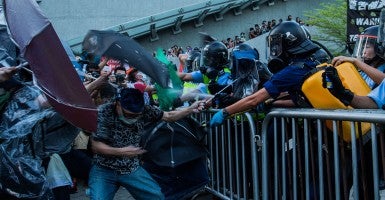 Protesters are pepper sprayed by police but hold their ground protected by rain coats, goggles and umbrellas. (Photo: Todd Darling/Polaris/Newscom)

Q: Why are thousands of people demonstrating in Hong Kong now?

Because when the former colonial master Britain handed Hong Kong over to China, the latter promised universal suffrage in the choice of their leader, or chief executive, and, under the formula of “One Country, Two Systems,” that their separate way of life would be respected.

China appears to have backtracked on both fronts, saying recently that Hong Kong people could only vote for their leader from among a handful of candidates picked by Beijing and beholden to the Communist Party. Hong Kong is a sophisticated financial center with a high GDP per capita, and its 6.8 million people know they can make their own political choices. Ultimately, of course, they are protesting because freedom is elemental to the human condition: we’re all born free and it’s only bad governments that check our liberties. Our instinct is to constantly break free.

Q: Who are some of the key leaders and figures in the demonstrations?

Martin Lee is the father of the Hong Kong democratic movement, a soft-spoken septuagenarian legislator who has worked indefatigably for freedom since the 1980s. Another is Anson Chan, the former head of the civil service and the most popular and trusted political figure in Hong Kong. Jimmy Lai, the owner of Hong Kong’s last independent newspaper, Apple Daily, supports freedom not just in Hong Kong, but also in the mainland. A new leader that is emerging in these latest protests is Joshua Wong, a bookish 17-year-old Christian student who is inspired by his Christian faith and America’s Founding Fathers.

Q: How is China responding?

By overreacting and not permitting Hong Kongers to have the liberties to which they are entitled. China could very easily have this experiment in democracy in Hong Kong, a city that is closed off from the rest of the Mainland, to see how democracy functions. That Beijing won’t even countenance this limited experiment shows that the Communist Party is intent on holding on to the grips of power.

Q: Is this a surprising turn of events? Was there any belief that the people of Hong Kong were restless prior to this?

No, it’s not surprising. All China watchers have been waiting for this for months.

Q: What are the possibilities about what could happen in the days ahead?

It’s hard to predict. This stand-off is looking to too many of us like the buildup to Tiananmen Square in 1989, which as we know ended in the tragic massacre of thousands of Beijingers after supreme leader Deng Xiaoping and Prime Minister Li Peng called in troops from the countryside. We all pray that this will not happen and China knows that it will pay a heavy price. Some 60,000 American expatriates live in Hong Kong, which is one of our largest markets for many products and home to some 1,400 offices of U.S. companies.