US Should Press Tokyo to Free Jailed Navy Lieutenant 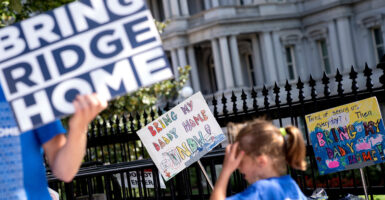 Relatives of Navy Lt. Ridge Alkonis, who is imprisoned in Japan, demonstrate near the White House on Sept. 15 for U.S. diplomatic action to secure his release. (Photo: Stefani Reynolds/AFP/Getty Images) 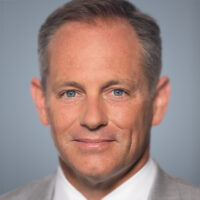 U.S. and Japanese diplomatic and military leaders on Wednesday will meet for the annual “2+2” dialogue.

Formally known as the U.S.-Japan Security Consultative Committee, the meeting brings together defense and diplomatic ministers and secretaries of the two countries.

This year’s discussion is intended to focus on modernizing the alliance to meet 21st-century challenges, but the talks should first address the unfortunate case of U.S. Navy Lt. Ridge Alkonis.

A devout Mormon who doesn’t drink, Alkonis inadvertently killed two Japanese nationals May 29, 2021, when he passed out due to altitude sickness while driving his wife and children back from a trip to Mt. Fuji.

In a Japanese court, he pleaded guilty to negligent driving in the hope of receiving a suspended sentence. Furthermore, as is customary in Japan, Alkonis paid $1.65 million in restitution or “gomen” (“I’m sorry”) money to the victims’ families.

That was not legally required, but Alkonis, who did missionary work in Japan before joining the Navy, understood the importance of doing the right thing culturally in Japan.

But instead of receiving a suspended sentence, a Japanese court sentenced Alkonis to three years in prison last year.

Under the Status of Forces Agreement between the U.S. and Japan, Japanese authorities had the right to exercise jurisdiction over Alkonis and try him in their courts, and the sentence handed down by the judge was lawful under Japanese law. Still, the U.S. should press for his release.

The case is a tragedy. Innocent Japanese citizens died in the accident. But Alkonis passed out due to altitude sickness, accepted responsibility, paid restitution, and has most likely come to the end of his naval service because of this tragic event.

But it’s hard to imagine most Japanese supporting the continued imprisonment of an otherwise honorable U.S. naval officer who was attuned to Japanese culture and who followed norms expected in such circumstances.

The U.S. side should press for reciprocity in this case. Alkonis has been held in solitary confinement. Why?

Japanese officials conducted no medical exams or blood tests immediately following the accident to rule out any potential medical or other defense for the accident. Why?

Given the unique nature of this case, Sen. Mike Lee, R-Utah, who visited Alkonis in prison, pushed the Navy and then the Senate to continue his pay and benefits while he served out his sentence. His pay and benefits would have expired at the end of 2022, as is the case for all service personnel sentenced to prison.

When the Navy indicated that unless Congress acted, Alkonis’ pay and benefits would expire at the end of 2022, the Senate passed, by voice vote, a provision that requires the Navy to continue his pay and benefits unless and until the secretary of the Navy decides whether he will be removed from further naval service.

As retired Navy captains with combined service of more than 50 years and numerous overseas postings under our belts, we think this is a case that merits the attention of senior leaders from both countries.

Justice has already been served in this case. Further incarceration is unwarranted and unfair, given the accidental nature of the incident and the contrition demonstrated by Alkonis.

Alkonis’ story is tragic, but given the importance of the alliance with Japan, more facts must be brought to light, both in Japan and here.

This week’s “2+2” meeting is the best venue to resolve the matter and bring Alkonis home. Such a move will, in fact, strengthen the U.S.-Japanese alliance.