Answers May Be Coming in the Jussie Smollett Case 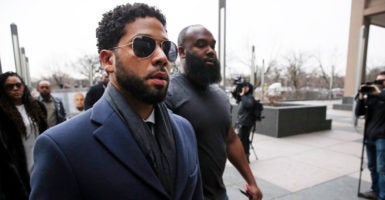 The city of Chicago dropped all charges against Jussie Smollett after evidence showed he staged a hate crime against himself. (Photo: Nuccio DiNuzzo/Stringer/Getty Images)

Sunlight is the best disinfectant, as the old saying goes. And that’s exactly what one retired Illinois appeals court judge wants to use to get to the bottom of why, and how, Kim Foxx handled the Jussie Smollett case the way she did.

We previously bemoaned the lack of transparency in the Smollett case here and here, so it’s refreshing to see a distinguished attorney and judge call for a complete airing of the sordid affair. And the situation is getting more intriguing by the day.

O’Brien wasn’t the only attorney eager to get to the bottom of why Foxx let Smollett off the hook. Former prosecutor Saani Mohammed also filed a formal request to unearth the facts and circumstances of the handling of this case.

On Monday, Mohammed moved to withdraw his petition, according to the Chicago Sun-Times, most likely because O’Brien’s petition and the investigation by the Cook County Office of the Independent Inspector General were already doing the job.

The man tasked with investigating would be Patrick M. Blanchard, who serves as the appointed independent inspector general for Cook County. Yet his background raises questions.

Blanchard previously served as a Cook County assistant state’s attorney (the very office that Foxx now heads) from 1993 to 2008. Foxx became head of that office in late 2016, but before that she had served as an assistant state’s attorney in that office for 12 years, according to her office’s website, meaning that she and Blanchard served in the office at the same time.

Whether Blanchard will have to recuse himself in the inspection remains to be seen, because he may not be all that “independent” if he knows Foxx and worked closely with her while in the State’s Attorney’s Office together.

We’ll know more this week about whether O’Brien’s efforts to investigate stand a chance, as Judge LeRoy Martin Jr. will host a hearing on the matter on Thursday. As the presiding Criminal Division judge, he will decide whether to appoint a special prosecutor.

If he says yes, things will get very interesting. If he says no, O’Brien will then have to decide whether to appeal his denial, if she can.

Either way, the Smollett mess will stay in the news for some time to come.

In her op-ed, O’Brien bluntly writes, “We deserve answers. We deserve open court files. We deserve transparency in every case.” She ends her piece by writing, “The rule of law is why people fought and died for our country, so the least we can do is fight for some answers.”

Hard to disagree with that.