Student Loans Can Be Perilous. Here’s a Better Way to Pay for College. 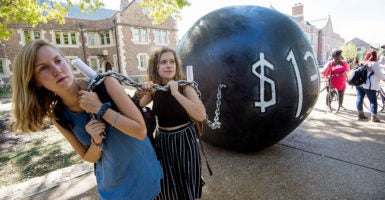 There is a better solution than the ones politicians offer, which stick the taxpayer or the loan lenders with the whole bill.

Investors give money to a college, and the college then gives a free or partially free education to some students. When those students graduate, they pay the college a certain percentage of their future income.

It’s a way “for the school to say to students, ‘You’re only going to pay us if we help you succeed’,” explains Beth Akers, co-author of the book “Game of Loans.”

Andrew Hoyler was thrilled when Purdue University got him an income share agreement loan. Now he’s a professional pilot, and he’ll pay Purdue 8% of his income for 104 months.

“After that 104-month term ends, if you still owe money, it’s forgiven, forgotten, you don’t owe another penny,” he says in my latest video. “Now, if I find myself in a six-figure job tomorrow, there’s a chance that I’ll pay back far more than I took out.”

Hoyler wouldn’t mind that, he says, because of “the security of knowing that I’ll never [have to] pay back more than I can afford.”

What students pay depends partly on what they study.

“It conveys information to the student about how lucrative a different major’s going to be,” says Akers. “Some think that’s unfair, but really that’s just a way [investors] can recapture the money that they’ve put up.”

“It may also sway students away from majors that don’t have job prospects,” says Hoyler. Income share agreement recipients learn “not only what a career may pay, but how stable it may be, what the future is like.”

“We should invest in students the same way that we invest in startups,” says Akers. “Share equity.”

With one difference: The college picks the student, so investors don’t have a direct relationship with the student.

Purdue income share agreement recipient Paul Larora told me, “We don’t know who the investor is, but I’d love to give him a hug or buy him a beer!”

“The institutions are saying, ‘If I’m operating as the middleman, I can make sure that no one’s taking advantage of my students,'” explains Akers.

Sadly, many politicians would rather have the government handle student loans and charge all students the same rate.

President Barack Obama signed a student debt relief bill that he claimed would “cut out private middlemen,” meaning banks. He said that “would save taxpayers $68 billion!” It didn’t. Costs to taxpayers increased.

Some politicians are so clueless that they still blame banks.

In one hearing, Rep. Maxine Waters, D-Calif., chair of the House Financial Services Committee, demanded JPMorgan Chase CEO Jamie Dimon tell her, “What are you guys doing to help us with this student loan debt?”

Instead of forcing banks out of the loan business, we should get government out of it. Banks are in the business of assessing loan risk.

If actual private lenders, people with skin in the game, made loans, then they’d care about being paid back.

They’d tell students which majors might lead to higher-paying careers and warn them that studying sociology, art history or gender studies may make it tough to get out of debt.

But with the government charging the same rate to everyone, students don’t have much incentive to think about that.

The Brookings Institution found that 28% of students don’t even know they have a loan.

The market would make better judgments and stop students from starting their adult lives under a burden they may never escape.

Larora had a good answer to that, which is also serious advice: “If you don’t have a job, you’re not paying anything! Where’s the servitude in that?”