Here’s My Plan to Fix Student Debt Without Raiding Taxpayers 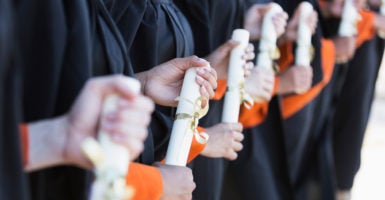 Confounded by rising piles of student debt, cash-strapped graduates across the country are realizing that their degrees don’t offer enough bang for the buck.

It’s time we rethink the way students pay for college.

College is an investment. The conventional wisdom tells us to borrow for college now and be proportionally rewarded in the job market later. But increasingly, Americans are learning—once it’s too late—that they borrowed too much, or studied a subject that won’t pay in the job market.

Collectively, 44.7 million Americans owe a total of $1.56 trillion in student debt and face an average monthly payment of $393, according to the Federal Reserve. And some can’t afford to pay it back at all: 11.5% of all student loans are delinquent for 90 days or more.

Why isn’t the investment working?

Chiefly, the cost of higher education has become unaffordable for many students. Between 1989 and 2016, the price of college increased eight times faster than wages. In 2017-2018, the average cost of tuition and fees was $34,740 at private colleges and $9,970 for state residents at public colleges, according to the College Board. Multiply that by four years, and students hit tuition costs between $39,000 and $139,000 for a bachelor’s degree.

For a recent graduate earning a median salary of $48,400, after you factor in rent, groceries, and other normal living expenses, there’s not much left to throw at their mountain of debt.

The good news is, there’s a way to reinvent the way we pay for college that corresponds to realistic earnings after graduation, thus tying tuition costs to demand in the job market.

Colleges could begin offering “income share agreements,” where students agree to pay for college with a percentage of their future earnings. This way, colleges and universities would be incentivized to help students secure good paying jobs after they graduate, because tuition payments would depend on it.

Responsibility would fall on the student as well. Income share agreements would encourage prospective students to research starting salaries for their major and learn what they can expect in return for their studies.

In a desire to see income share agreements more widely offered, my Democratic colleague Vicente Gonzalez of Texas partnered with me to introduce the Kids to College Act, a bipartisan bill that would encourage more schools to utilize these agreements.

But not all lawmakers are thinking big picture like this.

One Democratic senator offered a magic wand to “erase” up to $50,000 in student debt for loan recipients. As one columnist pointed out, this offer is akin to advocating “old-fashioned, Tammany Hall-style bribery” by “handing out dollars to buy votes.” Of course, astute taxpayers will see through the scheme and realize it’s their hard-earned money being offered.

More importantly, “erasing” student debt would send costs of higher education soaring even faster and would further distort the market for higher education. If the plan succeeds, college costs could inflate indefinitely without ever being responsive to demand in the job market. If a student can’t pay back their loan, the American taxpayer ultimately would be forced to shoulder the burden.

The problem with magic wands is they do not exist. Debt does not disappear—it merely shifts onto someone else. The student debt crisis is a sign of system-wide failure, and we need a system-wide solution to fix it.