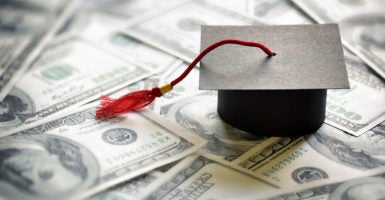 Ninety percent of student loans originate from the federal government, meaning taxpayers will lose if student loan debt can be discharged in bankruptcy. (Photo: BrianAJackson/Getty Images)

As Congress turns its attention to the problems facing higher education, the Department of Education announced last week that it will seek public comment on possible relief for students with outstanding student loan debt.

One proposed option is discharging student loans in bankruptcy court, as is done with other types of loans when borrowers are unable to pay. Under current law, people who file bankruptcy generally cannot negotiate away (i.e. discharge) their student loans except in very narrow circumstances.

While allowing people to discharge student loan debt through bankruptcy may seem like an attractive option, student loans are fundamentally different than other types of loans, and policy must reflect the uniqueness of this transaction.

One key difference is that student loans are typically not supported by collateral or any other sort of assets. Instead, student loans are used to obtain a service that may help produce income much later. In any bankruptcy negotiation, therefore, a student lender is in an extremely unfavorable position relative to other types of creditors.

When a troubled borrower is unable to pay off his or her home mortgage, for example, the bankruptcy process offers the ability to negotiate directly over the value of physical assets. The borrower’s collateral, as well as the value of the home, typically give both parties a direct financial incentive to work out a solution.

In the extreme cases, a lender can use these assets to defray the cost of a defaulting borrower. The exact process varies by state, but typically, assets with very low equity, such as a home purchased with a zero down payment loan, cannot be seized in bankruptcy.

A student loan can be thought of as a zero down payment loan—but with even less security for the lender. If a student is unable to pay off his or her education loan, the student would likely not be able to offer any assets in the bankruptcy process.

Education loans typically require no collateral, and the education itself is not a physical asset that can be used to defray the lender’s default cost. In other words, the lack of physical capital present in a student loan all but guarantees a lender will lose money if the loan can be discharged in bankruptcy.

Loans that invest in human capital must be treated differently than investments in physical capital.

Discharging student loans in bankruptcy would also be particularly harmful for the American taxpayers who are financing the federal student loan program. A better solution would be to transfer student loans to the private market and insulate taxpayers all together.

The marketplace of ideas and innovative flexibility, inherent in the private market, make it better equipped to solve the student debt crisis.

Additionally, the student debt crisis will remain a problem as long as students are encouraged to take out massive student loans. Turning off the open spigot of federal lending would encourage universities to keep their tuition prices in check, enabling more students to finance their education out of pocket or with a reasonably sized private loan.

As policymakers consider how to offer student debt relief, they should make protecting taxpayers and reducing college costs their top priority. Unfortunately, discharging student loan debt in bankruptcy court does not bring us any closer to achieving these goals.