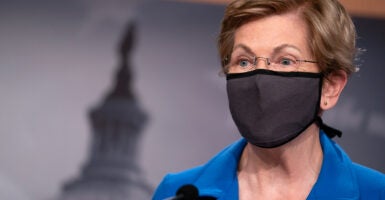 “We believe that Joe Biden can do that with the pen as opposed to legislation,” Sen. Elizabeth Warren, D-Mass., says of canceling student debt. Pictured: Warren speaks during a news conference on Capitol Hill Oct. 20, 2020, in Washington, D.C. (Photo: Stefani Reynolds/ Stringer/Getty Images)

Warren, who supported canceling nearly all student debt when she ran for president, said Tuesday that doing so was a “mandate” to Biden and Sen. Kamala Harris.

“For me it is a mandate to Joe Biden and Kamala Harris to do the things we can do, to cancel student loan debt for tens of millions of Americans,” Warren said during The New York Times Dealbook Summit, noting that doing so would be the “single biggest stimulus we could add to the economy.”

“We believe that Joe Biden can do that with the pen as opposed to legislation,” Warren added.

Though Warren and Senate Minority Leader Chuck Schumer have introduced a plan that would cancel $50,000 of student debt for every borrower, Biden has not agreed to that approach and has instead called on Congress to cancel $10,000 of individual student debt instead.

Biden has also not said whether he would adopt the measure via executive order and said Monday that he urged House Democrats to take up his proposal instead.

“It’s holding people up. They’re in real trouble. They’re having to make choices between paying their student loan and paying their rent,” Biden said Monday.

It’s simple: The White House and @senatemajldr have tried to put corporate bailouts ahead of families. https://t.co/mFsPjmlbHW

Any congressional action regarding the issue, however, will likely depend on whether Democrats can flip two Senate seats in Georgia in its January runoff. Republicans have opposed any actions catered to canceling student debt, and will keep their majority as long as they defend their Georgia seats.