How Ending Student Loan Forgiveness Will Help the Poor 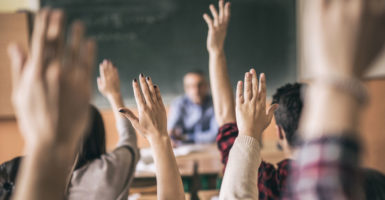 A college education offers many advantages. Graduates enjoy the benefits of their university’s alumni network, and the diploma can give grads a leg up over non-degree-holding competitors in the job market.

College graduates are generally likely to out earn non-grads over time, and those with postgraduate degrees improve their earnings potential even more.

But college doesn’t come cheap. According to the College Board, tuition and fees for the 2017-2018 school year averaged $9,970 for state residents and $25,620 for out-of-state residents attending public universities. The figure for private colleges was $34,740.

Even well-heeled families wonder: “How will we afford that?”

There is another important question about costs, though: “Why does current federal policy force people who never attend college to pick up the tab for many who do?”

America has far more college graduates than ever before. Yet two-thirds of Americans still do not hold bachelor’s degrees.

Many have eschewed college in favor of working in jobs that do not require a college degree. And, increasingly, young people thinking about college look at the astronomical price tags and say, “Thanks, but no thanks.”

Unfortunately, current loan forgiveness policies stick taxpayers with college tabs run up by thousands upon thousands of those who choose to go the bachelor’s degree route.

The Government Accountability Office predicts that, over the next 10 years, student loan defaults and federal loan forgiveness policies will gouge taxpayers out of $108 billion.

Congress has adopted these policies to help students deal with skyrocketing tuition costs. But top economists such as David Lucca, Grey Gordon, and Aaron Hedlund have determined that federal student aid programs have encouraged universities to raise tuition prices.

In other words, these heavy subsidies are part of the problem, not the cure. Congress would do better to deal with the root cause of high college tuitions rather than try to paper them over with ever more taxpayer money.

The Prosper Act, recently introduced in the House, takes several significant steps to achieve these goals. It would eliminate both public service and general loan forgiveness for new borrowers—a big plus for taxpayers now forced to pay off others’ debts.

It also would eliminate the Plus Loan program, which lets graduate students and parents of undergraduate students take out federal loans to cover the entire cost of attending college: food, lodging, books, activities fees, you name it. The American Enterprise Institute has identified these sky’s-the-limit, charge-everything policies in the Plus Loan program as a major contributor to rampant college inflation.

Still, the Prosper Act is no cure-all. It would leave federal lending caps irresponsibly high and even increase the amount of debt undergraduate students may take on. It would also continue the unwise practice of loaning taxpayers’ money to grad students and parents of undergrads. These policies will not put needed pressure on universities to lower their tuitions.

Redistributing wealth from taxpayers—most of whom are not college graduates—to pay for the college and postgraduate educations of others is a terribly inequitable way to deal with inflated college costs. And encouraging young people to go way over their heads in debt is immoral.

To help young Americans climb the ladder of economic mobility, Congress should shrink federal lending and let private lenders compete in a real marketplace, so that college students can graduate with less debt.

Lawmakers should also pursue policies that facilitate access to non-collegiate options for higher education, such as apprenticeships and vocational training. It’s a better deal for many young people and a fairer deal for all taxpayers.