Hungary Is Key to Shoring Up NATO Alliance 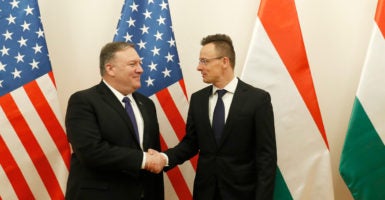 Closer ties with the countries of Central Europe are a national security policy priority for the Trump administration—and a long-overdue return to the policies of President George W. Bush after years of neglect by the Obama administration.

Within NATO, these countries are reliable allies, and within the European Union, they form a bloc friendly to Washington.

Twenty years ago last month, Hungary, Poland, and the Czech Republic became members of the NATO. It was a historic reversal, moving from the Warsaw Pact to NATO, and a great affirmation of their independence from Soviet/Russian domination.

In his March 13 speech at the 20th anniversary commemoration, U.S. Ambassador to Hungary David Cornstein recalled that Hungarians in 1999 voted by 85% in favor of joining NATO.

On the sidelines of the celebration in Washington of NATO’s 70th anniversary, Hungarian Minister of Foreign Affairs and Trade Peter Szijjarto and U.S. Deputy Secretary of State John Sullivan signed an updated defense cooperation agreement, building on the established status of forces agreement and military assistance from the U.S.

“Security conditions have changed significantly in recent decades,” Szijjarto said. The new agreement would ensure that NATO remains “the world’s most successful and strongest military alliance in the future.”

One of the areas not envisioned in the original agreement, however, was the surge in Russian cyberwarfare and information warfare, nor the Russian incursion in Ukraine, which abuts Hungary.

At the moment, close to 1,000 Hungarian soldiers are serving side by side with allied troops in NATO, [the European Union], and multilateral peacekeeping missions that make our countries safer.

To make the alliance stronger, Hungary is actively modernizing its military and purchasing NATO-compatible equipment, and is on track to meet its NATO commitment to spend 2% of its [gross domestic product] on defense.

Hungary is hosting the Heavy Airlift Wing at Papa Air Base, which provides critical support to NATO operations.

Hungary is also home to NATO’s Center of Excellence for Military Medicine and the NATO Force Integration Unit.

And we welcome Hungary’s initiative to host a NATO Regional Special Operations Command Center and establish a NATO Multi-National Division Central that will further facilitate NATO coordination and operations in the future.

An additional reason for advancing U.S.-Hungarian relations was provided by Secretary of State Mike Pompeo in February during his visit to Budapest, the first such high-level visit in many years.

Pompeo warned the government of Hungarian Prime Minister Viktor Orban not to get too close to China and Russia, both of whom are showing keen interest in splitting up NATO.

The United States is not the only game in town these days. In other words, it’s very much in the interest of both the United States and Hungary to get their priorities straight.

Closer U.S.-Hungary ties are a major step in the right direction.