What a Middle Eastern NATO Could Accomplish for Trump 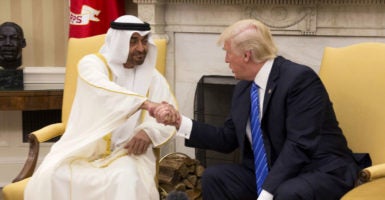 With the Middle East experiencing renewed levels of tumult, it begs consideration: Does the region need its own version of NATO?

This idea appeared in The Washington Post just this week. Josh Rogin reported that during the president’s stop in Saudi Arabia, he might lay out a proposal for a regional security alliance of Arab states.

It is not surprising that two major ports of call in the region—Israel and Saudi Arabia—would be part of President Donald Trump’s travels. The administration has put peace and stability in the Middle East at the top of his foreign policy agenda.

In addition to these state visits, the president has already met in Washington with leaders from Egypt, Jordan, the United Arab Emirates, and Turkey.

More than glad-handing, all these meetings look substantive, part of the U.S. effort to knit together a regional effort to achieve two key strategic goals: countering the destabilizing influence of Iran, and defeating the Islamic State and al-Qaeda.

Traditionally, the U.S. has managed its Middle East influence through bilateral alliances. But even during the presidential transition, there were proposals for  establishing a more formal multi-national mutual security architecture along the lines of NATO.

That’s not an unprecedented idea. In the 1950s, the U.S. supported the Central Treaty Organization, organizing the “Northern-Tier” (including Turkey, Iraq, Iran, and Pakistan) as part of a containment strategy against the Soviet Union.

The proposal floundered, argues Michael Doran in his excellent book, “Ike’s Gamble: America’s Rise to Dominance in the Middle East” (2016), because the U.S. failed to understand the internal dynamics of the region. Successful security alliances require a common threat, but that is not enough to build and keep a coalition together.

Alliances endure because of common interests.

Conflicting concerns have always stymied efforts to build coalitions in the Middle East. The Gulf Cooperation Council, for example, has flirted with military cooperation, but it has never amounted to anything serious.

The U.S. was successful in knitting together an Arab coalition force for the first Gulf War, but it was a temporary effort designed for a specific mission. It did not endure past the war.

“Frankly, there is too much distrust and suspicion between the regional countries for this to ever be effective,” argues Heritage Foundation scholar Luke Coffey. “The best way for the U.S. to enhance regional defense capabilities is through deepening bilateral relations with key countries.”

Yet, even if such an alliance never comes to fruition, there could be value in even suggesting the idea.

Uniformly, the Arab states and Israel are both anxious for the U.S. to r-engage in the region and help deal with the twin dangers of Iran and ISIS/al-Qaeda.

“Any further inter-Arab security and defense cooperation is very welcome as another way to put pressure on Iran,” argues Heritage Foundation regional security expert Jim Phillips, “but the White House needs to manage expectations with this.”

A formal alliance is unlikely to be quickly accomplished and could amount to little of practical value.

Moreover, even if such a treaty organization is even contemplated, it should not—and really cannot—be a substitute for the important bilateral relations that the U.S. currently enjoys with the countries in the greater Middle East.

A treaty organization might make sense as a mere suggestion to help shock the region into believing that the U.S. really is back as a balancing force to help quell the currently spiraling chaos in the region.

On the other hand, the U.S. should not over-invest in the effort at the expense of assembling the coalition it needs right now to undertake pressing and immediate tasks.

These urgent tasks include finishing the destruction of the ISIS caliphate, stabilizing the refugee populations, dealing with the counterterrorism threats from ISIS 2.0 that will likely persist in the region, preventing Somalia, Libya, and Yemen from becoming substantial bases of transnational terrorism, and diminishing Iran’s destructive influence in the region.

These tasks will require a comprehensive American-led effort of military, diplomatic, and assistance and engagement measures. They are tasks that cannot wait for a formal alliance structure to be established—if one ever actually does materialize.