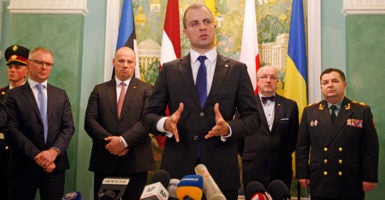 WARSAW, Poland—Tomasz Szatkowski is an anomaly on two fronts. He’s the youngest ambassador to NATO and represents one of just seven members of the 28-nation alliance that pay their full share to support it.

NATO policy requires member nations to spend at least 2% of their gross domestic product on defense. Poland does that now, and plans to spend 2.5% by 2030.

Poland has been increasing its defense spending for years, given both its proximity to, and history with, an aggressive Russia. In the 20th century, the European nation was invaded by both Germany and Russia.

“This is the lesson we learned hard, that you really have to invest in your own security,” Szatkowski, 41, who took the NATO job in July, told The Daily Signal.

While in Poland in early September to mark the 80th anniversary of the beginning of World War II, Vice President Mike Pence called on allies to meet their NATO obligations.

The burden sharing is significant because under the agreement among NATO nations, if one member is attacked, the other members would come to its assistance.

“NATO, in spite of its weaknesses, isn’t the perfect alliance, but it is the best that was created in the history of Western civilization,” Szatkowski said. “Therefore, we also have to maintain it. We also have to invest into it. It’s natural to us that we have to do our own part when we are expecting others to cover our back as well.”

Of the 28 members in NATO, only the United States, Poland, Great Britain, Greece, Estonia, Latvia, and Lithuania spend 2% or more of their GDP on the military, according to NATO. That’s an improvement from 2016, when just four countries met their obligations.

“Only a handful of NATO members can say that they are living up to their spending commitments. The U.S. is right to be concerned by this,” Daniel Kochis, senior policy analyst in European affairs for The Heritage Foundation, told The Daily Signal. “However, there is nothing in the 1949 North Atlantic Treaty that states that the alliance’s security guarantee is conditional on a certain level of defense spending by its members.”

Kochis noted that in recent years, defense spending has increased with an additional $41 billion invested by NATO allies from 2016 to 2018. Although only the seven countries meet their obligation, 16 allies do meet the NATO benchmark to spend 20% of their defense budgets on new equipment.

“While not enough NATO member states are meeting the 2% spending commitment, encouragingly a majority of nations (24) have plans in place to reach the 2% of GDP benchmark by 2024—a testament to shifting geopolitical realities, and, perhaps, reception of a very consistent U.S. message,” Kochis said.

Burden sharing is a bone of contention for some Polish citizens such as Jarey Baster, a resident of Tarnobrzeg, a city in southeastern Poland.

“It’s not fair that Polish people are paying their NATO share, and other countries are not paying,” Baster told The Daily Signal. “We don’t want to pay for Germany and France. But we want to pay our own share.”

Poland has offered to spend $2 billion on building military bases to house the troops. The Polish government is also buying 32 F-35A fighter jets from the United States.

Trump indicated he would relocate troops currently based in Germany, a country that despite being the strongest economy in Europe falls well short of its NATO obligation with just 1.36% of GDP going to defense.

Paulina Michalczyk, a resident of Poznan in western Poland, said she worries that increased military spending and U.S. troops in the country could make Russia more aggressive.

“We are not at war. We are not threatened by any one country. So, Russia’s a threat. It has always been. It always will be,” Michalczyk, 29, told The Daily Signal while she was visiting Krakow.

“What happened in Crimea [in Ukraine] was very bad. But, if the Russians started doing something, I think the help from the American soldiers would be appreciated by us,” Michalczyk said of Russia’s annexation of the Ukraine’s Crimean Peninsula in 2014. “But, for now, the situation is more or less settled.”

Poland became a NATO member in 1999, and although it values the NATO alliance today, the country once was central to a Soviet-led counterweight alliance, the Warsaw Pact, during the Cold War.

Before taking his position as NATO ambassador in July, Szatkowski served as deputy minister of national defense from 2015 to 2019. His responsibilities included international affairs, organizing the 2016 NATO summit in Warsaw, and negotiating with the United States on increasing its military presence in Poland.

“I come from a family with patriotic and military roots,” Szatkowski said. “So, for me, I was interested in a military career. But I’m [nearsighted]. It wasn’t possible. So, I did law.”

He earned a law degree at the University of Warsaw before studying abroad in Britain and the United States.

“Then, towards the end of my time in the university, I had to follow my passion, my interests,” Szatkowski said. “Those were always connected to national security issues. At that time, courses for civilians dealing with national security weren’t really developed.”

He received a postgraduate degree in war studies at King’s College in London. He also completed a training course for staff officers at the U.S. Naval Postgraduate School in Monterey, California, and a course in defense policy programming and strategic management at the Defense Academy of the United Kingdom.

From there, he held advisory roles for members of the Law and Justice party in the Polish parliament and later the European Parliament.

‘Skin in the Game’

When the Law and Justice party was voted out of power in the 2010 elections, Szatkowski left government and eventually started a national security think tank called the National Center for Strategic Studies, which he ran from 2013 to 2016.

The Polish think tank worked with the Center for Strategic and Budgetary Assessments, a Washington-based nonprofit, and also helped conduct the first U.S.-Polish war games.

“I very much wanted to import some of the good, solid defense analysis that I saw in the U.S. and to bring up the quality of defense debate,” Szatkowski said.

After Law and Justice came back to power in the 2015 election, he was asked to work for the Ministry of National Defense for a year. But, Szatkowski said, one year turned into four years, before he was appointed to the NATO position this past summer.

“NATO needs to continue to demonstrate its commitment to collective defense,” James Carafano, vice president for national security and foreign policy at The Heritage Foundation, told The Daily Signal. “Nothing will send a stronger signal to [Russian President Vladimir] Putin than if every nation has its full allotment of skin in the game—i.e., by fulfilling all its obligations to the alliance.”

The NATO Heads of State and Government meeting will take place Dec. 3 and 4 in London to mark NATO’s 70th anniversary. Burden sharing, which Trump has promoted, likely will be an issue.

“The London meeting offers members the opportunity to make a serious commitment to put meat on the bones of the 30-30-30-30 plan, which requires NATO to have 30 battalions, 30 fighter squadrons, and 30 ships ready to deploy within 30 days,” Carafano said, adding:

This initiative would address both capacity and readiness issues, seriously enhancing the credibility of the alliance’s conventional deterrence. If the allies dedicated themselves to these goals, then the debates and finger-pointing over minimum funding and objective levels would likely be de-politicized and resolve themselves. Instead, leaders could focus on the concrete capabilities that will attract Putin’s attention.