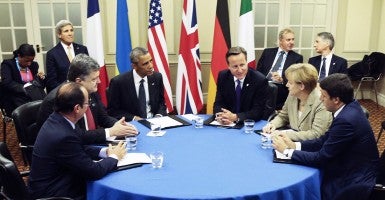 This week’s NATO Summit in the United Kingdom couldn’t come at a more important time. Russian aggression is on the rise. NATO’s combat mission in Afghanistan is ending. The Alliance needs focus. The U.S. should use this opportunity to refocus NATO on the basics, with renewed emphasis on collective security and territorial defense as envisioned in the 1949 North Atlantic Treaty, the Alliance’s founding document.

In his 6,778-word State of the Union address in January, President Barack Obama mentioned Ukraine only once and made no mention whatsoever of the 2014 NATO Summit. Since then Russia has illegally annexed the Crimean Peninsula, destabilized eastern Ukraine, provided a rag-tag group of separatists with some of the most advanced weapon systems in the Russian arsenal, and backed all of this with the technical expertise of Russian Special Forces.

Europe is experiencing a 21st-century belligerent Russia with 18th-century imperial ambitions. Understandably, some NATO members in Eastern Europe are becoming nervous. The U.S. has only started to wake up to the challenge that Russia poses to NATO.

The Russian “reset” is now considered a regret. Removing from Europe two armored brigades with their 10,000 troops and tanks was clearly a huge error. No matter how it is spun, replacing these troops with rotational forces from the United States will not be enough. The $1 billion that President Obama has pledged over the summer for his so-called European Reassurance Initiative is a drop in the bucket compared with what is really needed in light of U.S. military reductions in Europe. As with everything, one must read the fine print. This money is coming from Overseas Contingency Operations funding, so it is good for only one year. This is a response to media headlines­­—not a strategy.

It’s not just the U.S. that has taken its eye off the ball. The European countries need to start investing more in their defense. As an intergovernmental security alliance, NATO is only as strong as its member states. In 2013, just four of the 28 NATO members—the United States, Britain, Estonia, and Greece—spent the required 2 percent of gross domestic product on defense. Since 2008, Russian defense spending has increased 31 percent, but defense spending in Europe decreased by 15 percent. To put this problem into perspective, New York City spends more on policing than 14 European NATO members spend on their national defense.

Even so, some NATO members don’t support this idea on the grounds that it will antagonize Russia. Shockingly, some of the same NATO members who were on the frontline during the Cold War, and thereby benefited greatly from permanent NATO bases in their country, are attempting to block the establishment of bases in the Alliance’s new frontline states in Eastern Europe. It makes sense—from a military and diplomatic point of view—to base robust capabilities in Eastern Europe. After all, deterring Russia and defending the Baltics will be far easier than liberating them.

Since its creation in 1949, NATO has done more to promote democracy, peace, and security in Europe than any other multilateral organization, including the European Union. The 2014 NATO Summit comes at a pivotal time for the Alliance. It is essential that the U.S. continue to be an active participant in the Alliance’s future and chart a course back to basics.