Trump Is Right. NATO Countries Need to Up Their Defense Spending. 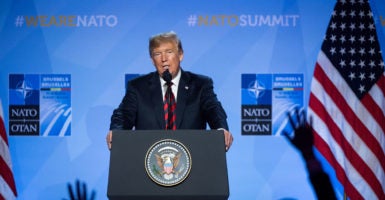 President Donald Trump may have offended some of our allies last week when he delivered a stern message reminding them of their unmet defense spending promises, but it was not a message they haven’t heard before.

“If we’ve got collective defense,” then-President Barack Obama said at a 2014 NATO press conference in Brussels, “it means that everybody’s got to chip in, and I have had some concerns about a diminished level of defense spending among some of our partners in NATO. Not all, but many.”

When NATO was established in 1948, the U.S. was concerned that many European democracies were too militarily weak to protect themselves from USSR encroachment. An alliance against a common enemy seemed the best option for defense while allowing European economies and militaries to rebuild after World War II.

The U.S. may not have been immediately threatened with invasion of the homeland, but we saw an opportunity to hedge Soviet expansion.

The alliance has been spectacularly successful, but the world has changed a lot over the past 70 years. Europe has been rebuilt. NATO has added allies. The USSR fell, global terrorism burgeoned as an imminent threat, and Russia, while again a threat, learned new tricks.

What hasn’t changed is the U.S. continuing to bear the greatest brunt of NATO’s financial burden.

This is simply not acceptable. Alliances are built on trust, and our trust is undermined when our allies fail to meet their defense spending promises.

We need a better picture of what our allies’ defensive capabilities really are. That is why I introduced the Allied Burden Sharing Report Act of 2018.

While the percentage of GDP spent on defense is a relatively easy metric to find, and it does help us get a sense of a country’s military readiness, it is an imperfect measure. What is less readily available is what our allies are spending that defense money on. Is it going to tanks and planes, or military pensions?

This bill seeks to remedy that by requiring the Department of Defense to resume compiling and submitting an extensive report that includes the common defense contributions of NATO countries and our other allies.

A report of this kind was originally ordered in the 1985 National Defense Authorization Act, and continued in some form until 2004, when Pentagon officials decided to shift their focus to our allies’ contributions to the global war on terror. However, as the geopolitical climate has once again shifted, it is time to pass this bill and bring back the report.

If we are to continue entering into and maintaining alliances to protect others from near-peer countries like Russia and China, it is essential we have a global, holistic view of our allies’ contributions.