Trump Eyes More US Troops for Poland, Easing Poles’ Visa Travel to US 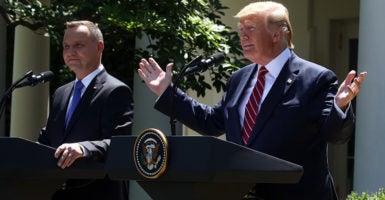 President Donald Trump and his Polish counterpart, Andrzej Duda, speak at a news conference in the Rose Garden at the White House on June 12. (Photo: Mark Wilson/Getty Images)

“It’s a complex situation, as you know,” Trump said of finalizing a decision on the Visa Waiver Program. “But we are getting very close. We allow very few countries to join, but Poland is one we are thinking about allowing in, probably in about 90 days.”

The Visa Waiver Program allows the citizens of the current 38 member states to travel to other participating countries for up to 90 days without having to obtain a visa. If approved, individuals are authorized to travel within a two-year period for up to 90 days at a time.

Duda said he was optimistic this time, inasmuch as previous administrations have considered adding Poland to the list.

“This is the first U.S. administration that has treated this in such a serious way and such a comprehensive way,” Duda said. “Covering Poles with the Visa Waiver Program is going to be possible before the end of the first term of President Donald Trump.”

Under the program, extensive vetting and background searches still take place through the Electronic System for Travel Authorization.

Duda’s visit marks the 20th anniversary of Poland joining NATO. Trump noted that Poland and the United States are among the eight countries—out of 28 NATO members—that pay their full NATO dues, spending 2% of the country’s gross domestic product on defense.

In a move that was unusual before the press conference, an F-35 flew over the White House.

This month also marks 30 years since Poland, a former communist country, held its first free election since the end of the Cold War.

A Polish reporter asked Trump if he would formally announce Poland’s inclusion into the Visa Waiver Program during his expected visit to Poland in September.

“I think it’s a very good idea. Thank you very much for giving me that idea,” Trump said.

Before the Rose Garden press conference, the two leaders addressed a smaller group of pool reporters in the Oval Office, where Trump announced the increased U.S. military presence in Poland.

Despite rumors it would be called “Fort Trump,” the president stressed he would have nothing to do with naming the military station.

“I have nothing to do with naming it. Fort Trump?” he said. “It’s up to them. They can name it whatever they want.”

Trump added, “We’re talking about 2,000 troops, taking them from Germany or moving them from another location.”

The president said the action was not intended to pressure Germany to pay its full share of defense spending in the NATO alliance.

Asked about his Polish counterpart’s since-rescinded policy of trying to require some Polish Supreme Court judges to retire at 65 rather than 70, Trump responded that he didn’t support such an effort.

Duda explained that some of the judges sat on the court during the Soviet era.

“I was surprised to discover that, in the Polish Supreme Court, there was a whole group who were issuing sentences—members of the Communist Party—before 1990, who were even passing sentences during the martial law [period in the early 1980s] sentencing people to prison,” Duda said.

“When I was asked if the Supreme Court needs to be reformed, I said ‘yes.’ If Poland is supposed to be a truly democratic, free, and sovereign country, if it is supposed to be the country we want it to be for our children—for the generation who were born after 1989—then for God’s sake, those people have to leave. They have to retire,” he said.

The Duda administration ultimately backed away from the policy after a clash with the European Union in 2018.

The Polish leader explained that freedom of speech and democratic principles are protected in his country.

“Poland respects all constitutional standards, just as in the United States. The right to assemble, the right to freedom of speech. There is free media in Poland,” Duda said. “ … Poland today has a quite conservative government, and that government has got certain standards of action. Not everyone subscribes to those standards, especially people of more leftist views. But this is the nature of democracy.”

During the Rose Garden press conference, Duda also took a question about whether he considered Russia an ally or an adversary. He provided a long history of Russian aggression against Poland.

“I would very much like Russia to be a friend of Poland,” Duda said, but added Moscow continues “showing it’s very unkind, imperial face.”