It’s Time for Poland to Join the Visa Waiver Program 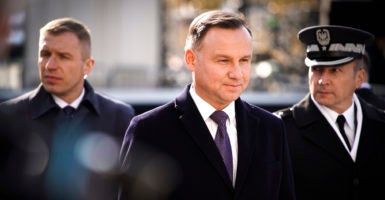 President Andrzej Duda of Poland is set to visit President Donald Trump at the White House this week to celebrate the 20th anniversary of Poland joining NATO and to discuss matters of defense, security, energy, and trade. As longtime allies, it is time to take further steps to mutually improve security for both nations–and adding Poland to the Visa Waiver Program would do so.

Judiciously incorporating Poland and other allies into the program would improve the sharing of intelligence with the U.S., including information about known or suspected terrorists, criminal activity, and lost and stolen passports. It also would increase travel and tourism and deepen the connection between our countries.

The Visa Waiver Program allows the citizens of the current 38 member states to travel to participating countries for up to 90 days without having to obtain a visa. Extensive vetting and background searches still occur through the Electronic System for Travel Authorization. If approved, individuals are authorized to travel within a two-year period for up to 90 days at a time.

The Visa Waiver Program has a number of requirements that must be met for a country to participate, such as maintaining a non-immigrant visa refusal rate of less than 3 percent, providing reciprocal travel privileges to U.S. citizens, and sharing intelligence.

The Visa Waiver Program generates a great deal of travel to the U.S. According to the Department of Homeland Security, non-immigrant admissions from member countries totaled roughly 23.6 million in 2017, or 31 percent of the total—a definitive boost for tourism in the U.S.

The program is a boon for security as well, as shared information from Visa Waiver Program participants has aided criminal investigations and counterterrorism vetting in the U.S.

In tune with Duda’s upcoming state visit, it is time to recognize that Poland deserves Visa Waiver Program membership, even though it would require  re-evaluating the policy of requiring a visa refusal rate of less than 3 percent.

Previously, countries with a visa refusal rate of 10 percent or less could join the program, but Congress has since lowered the requirement to 3 percent. This means nations looking to join today sometimes have lower rates than member countries did when they first joined.

But a better metric to focus on is the visa overstay rate, which more accurately measures the risk of individuals overstaying their visas. Thus, the best solution would be to return to the previous 10 percent visa refusal rate standard, and to add in a requirement that a low visa overstay rate must be maintained as well. This would protect the integrity of the program and allow for growth.

An alternate method for joining the program also could be made available to NATO members. Countries that meet their military spending obligations under NATO—2 percent of GDP— and have a low overstay rate should be allowed to join the Visa Waiver Program. Considering the proximity to Russia of countries such as Poland, Romania, Bulgaria, and Croatia, which are members of NATO but not the Visa Waiver Program, and the increasing influence of China in the region, it would be prudent for the U.S. to grant them entry into the Visa Waiver Program if they meet such alternative requirements. Trump should be prepared to discuss paths forward on the program with Duda. Doing so would advance the U.S.’s economic, foreign policy, and security interests.