Turkey’s Arms Deal With Russia Is an Affront to NATO 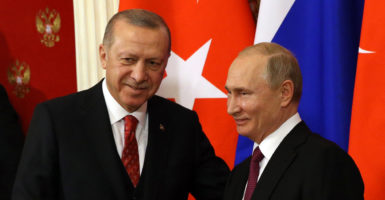 The Turkish government Tuesday reaffirmed its intention to complete the controversial purchase of a Russian S-400 surface-to-air missile defense system, a move appropriately drawing the ire of both parties in Washington.

Both Congress and Secretary of State Mike Pompeo have warned of punitive action should Turkey follow through on the purchase, which Turkey says could be completed as soon as next month.

Yet, despite this widespread U.S. criticism and the Trump administration’s promise of a punitive response, Turkish President Recep Tayyip Erdogan has called the purchase “a done deal” and has already begun preparing his nation for retaliatory U.S. sanctions once the Russian missile defense system is delivered.

Congress is right to oppose the deal.

As was noted last year in The National Interest, the S-400 is a “real game changer” with exceptional anti-aircraft capabilities and a wide range of other advantages, from the ability to detect stealth aircraft to the ability to detect, target, and engage non-stealth aircraft at a greater range than that of its American competitor, the Patriot system.

It shouldn’t come as a surprise that Russia has found no shortage of customers for the S-400. As Moscow prepares to deliver it to Turkey, it also has begun negotiations to sell it to Egypt, India, Qatar, and Saudi Arabia.

Russia’s sale of the S-400 system to the Turkish government is a direct threat to the national security interests of both NATO and the U.S. It would draw Turkey, a NATO member state, closer to Russia precisely at a moment when the U.S. is seeking to limit Moscow’s largely malicious meddling in the region.

But the U.S. national interest does not end at the symbolism of the sale. The S-400 system, a Russian invention, would be inoperable with existing NATO weapons systems—and Erdogan has promised to help Russia build the next generation of systems, known as the S-500.

This deal, far from a one-time agreement, could well become a dangerous and lasting partnership, especially as U.S.-Turkey relations have already slipped to “frenemy” status.

The largest sticking point for the U.S. government, however, has been the prospect of Turkey’s possession of both the S-400 system and U.S.-designed F-35 fighter jets simultaneously.

Turkey, a relatively new customer, formally received its first four F-35s in June 2018, though the jets still remain in the U.S. at Luke Air Force Base in Arizona, where Turkish pilots are training on them. Those F-35s are part of a much larger deal intended to shore up the capabilities of the Turkish air force.

As the bipartisan group of U.S. senators noted rightly in their New York Times op-ed, allowing Turkey to obtain the Russian-made S-400 is an “unacceptable risk, because its radar system could enable the Russian military to figure out how the F-35 operates.”

Specifically at risk is the F-35’s stealth capability: The Russian military could potentially study how the jet fighters interact with the S-400 system, working around the stealth technology and betraying a key U.S. strategic advantage around the world.

While the Pentagon has already paused the delivery of additional F-35s to Ankara, Congress and the State Department seem willing to take even firmer action, including canceling the F-35 sale entirely and closing off Turkish parts manufacturers for the fighter jets in favor of European alternatives.

Turkey, which has already invested $125 million in the development of the F-35, could lose part of its defense industrial base that was dedicated to that program.

What’s more, the U.S. could impose economic sanctions on Turkey under the 2017 Countering America’s Adversaries Through Sanctions Act, which recommends punitive economic steps against any countries that buy Russian military technology.

Although Erdogan doubts American resolve, saying that his country will “sooner or later … receive the F-35s,” the prospect of a retaliatory U.S. response has rightly caused Ankara to waver.

Yet, Turkey seems determined to press on. Erdogan, seemingly unmoved by offers instead to purchase the U.S.-made Patriot air defense system and increasingly toying with anti-American rhetoric, seems to see the Russian relationship as more important.

To be sure, Turkey and Russia are growing ever closer as Turkey seeks solutions for its security challenges and economic woes, but this cooperation is hugely dangerous for the NATO alliance—and therefore, for Turkey itself.

Erdogan would do well to understand the reality: NATO is his only real security partner. Vladimir Putin’s Russia is neither interested in, nor benefits from, Turkish security and prosperity.

Putin’s efforts to separate Turkey and other Middle Eastern states from their U.S. partnerships are not an attempt to give them a better alternative. They are singularly focused on driving a wedge between Washington and its NATO and Middle Eastern allies to counter what he sees as challenges to Russian influence.

Ankara still has time to back away from this misguided agreement and embrace its best hope of a lasting security and economic partnership with the U.S. and its other NATO allies.

Although Erdogan called President Donald Trump on May 29 to discuss the S-400 issue, U.S. officials have denied Turkish claims that Trump agreed to establish a bilateral working group to study how to mitigate the risks posed by the Russian weapons system.

A Pentagon spokesman rejected those claims.

“We have been clear that purchasing the S-400 would create an unacceptable risk because its radar system could provide the Russian military sensitive information on the F-35.  Those concerns cannot be mitigated,” Defense Department spokesman Eric Pahon told the Al-Monitor website.

In any event, Trump is unlikely to be receptive to Ankara’s stubborn foot-dragging on the issue. The president has spent years lambasting NATO allies and others who fail to contribute to the security relationship and rely unfairly on the benevolence of the U.S. government.

In recent years, Turkey has been one of the worst offenders on both counts. The S-400 system, should it be set up on Turkish soil, would be one of the most obvious betrayals of that trust in decades.