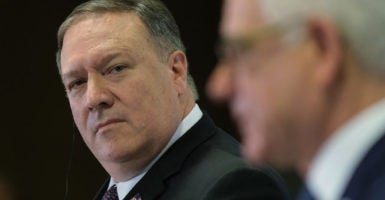 Europeans routinely complain about being neglected by U.S. administrations.

As much as Europeans doted on then-President Barack Obama, he indeed treated them with benign indifference, taking their support for granted.

But now, with Secretary of State Mike Pompeo having made his way through their capitals last week, Europeans have gotten a taste of a new and tougher style of engagement that is making some bristle.

Pompeo had several priorities to cover:

A lack of U.S. engagement in the region under Obama opened the door to Chinese and Russian investment and influence.

It had been 20 years since Slovakia received such a high-level visit from the United States, and the last time Hungary received a U.S. secretary of state was with Hillary Clinton in 2011.

The U.S. government today is especially concerned about the expansion of China’s Huawei Technologies—the world’s largest telecommunications equipment maker—into Hungary and Poland, as well as Hungary’s support for the TurkStream pipeline, which bypasses Ukraine and is the main conduit for Russian natural gas exports to Europe.

During his visit to Warsaw, Poland, Pompeo was joined by Vice President Mike Pence, who issued clear warnings to European governments at a security conference.

European companies are heavily invested in doing business with Tehran, and philosophically, they argue for positive engagement—a lucrative, but failed policy that has not produced any benign change in the Iranian regime’s behavior, particularly its human rights record and nuclear aspirations.

A final stop on the continent for Pompeo was Brussels, Belgium, where Iran was the focal point of a breakfast meeting with Federica Mogherini, the EU’s foreign policy commissioner.

Will Pompeo’s visit prove to heal or exacerbate divisions between the U.S. and European partners?

The most likely outcome will be a re-establishment of the close ties that were so carefully constructed under the Bush administration. That would be a major step in the right direction for U.S. foreign policy, particularly with Eastern European countries.

The Eastern and Central Europeans have been highly valued allies since the end of the Cold War. The United States and the rest of Europe remain deeply bound by economic and civilizational ties, yet political differences often get in the way.

Pompeo is navigating those differences through honest and principled engagement.