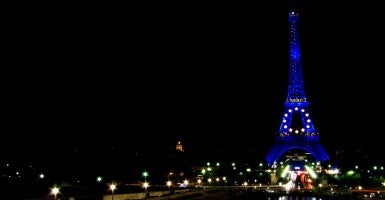 The Eiffel Tower in blue with the yellow stars of the European Union Flag (Photo: Yann Caradec / Flickr / CC BY-SA 2.0)

Since the end of the Second World War, the U.S. has encouraged the free nations of Europe to abandon their independence in the name of closer economic and political union. That process created today’s European Union, the EU.

We encouraged this partly because we believed that Europe was like the American states, and that they needed to unite as we had did under the Constitution. But, more directly, we encouraged it because we thought this was the best way to control Germany, reassure the other democracies, encourage them to trade freely, and help them stand against the Soviet Union.

We did it because we believed it was the right policy to pursue at the time. And after 1945, and during the Cold War, this policy did make a lot of sense. But unfortunately, after the Cold War ended, we never rethought the policy. What started off as a reasonable way to help Europe recover from the Second World War and fight Communism became an unthinking commitment.

It’s time to start thinking again. The U.S. has three aims in Europe: we want Europe to be secure, prosperous, and free. If our policies aren’t promoting those goals, we need to change our policies. And today, supporting the European Union is bad for all three of our goals.

The EU was never about military security: that was, and remains, the job of NATO. But today, the EU is trying to move into the realms of defense and security policy. At best this duplicates NATO; at worst, it detracts from NATO. Nor is the EU needed to encourage the nations of Europe not to attack each other: the risk of war between Germany and France today is zero.

The EU has done some good things for European prosperity. Above all, it’s eliminated tariffs in Europe: there’s no doubt that freeing trade made Europe more prosperous. But today, the EU exists mostly to impose expensive rules, promote job killing social welfare policies, maintain the failed Euro, and discourage the nations of Europe from competing against each other.

But it was precisely the competition of nation against nation inside Europe in previous centuries that made it great. Of course, we want that competition to be economic, not military. But if anyone – from Philip II to Napoleon – had ever managed to impose the same policies on all of Europe, it would have been much much worse off in the long run. Europe can’t preserve its place in the world by dragging everyone down to the same level.

And finally, there is freedom. The entire concept behind the EU is the belief that it is not safe or wise to allow the nations of Europe – and, really, the peoples of Europe – to make decisions for themselves. Instead, they need to be made by the EU in Brussels. The essence of the EU is anti-democratic and opposed to the sovereignty of the people. It is an effort to revive the old elite control of European politics in a new form.

It is time for the U.S. to recognize that the policy of supporting the EU is now longer in the interests of the United States, or of Europe itself. The time when that policy was wise has now passed.

Britain is moving towards a momentous referendum on its membership of the EU, which will likely be held in 2016. The U.S. should stop saying that it wants Britain to stay in the EU, and instead support the right of the British people – and all the peoples of Europe – to control their own destiny, free from the domination of Brussels.

Americans would never cede the right to govern themselves to a supranational bureaucracy. We should not ask others to do what we would not do ourselves.