Whirlpool Advocated for Tariffs on Washers. Now, It’s Going Through the Wringers. 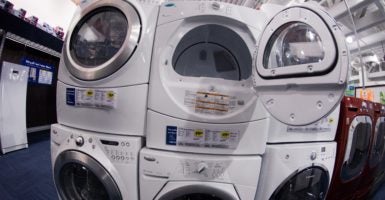 Whirlpool “expects about $300 million more in expenses due to higher import duty on raw materials [such as steel] used in its appliances,” Reuters reports. (Photo: Richard Levine/Corbis /Getty Images)

Michael Bugay is a member of the Young Leaders Program at The Heritage Foundation.

The tariffs were implemented because the government determined that washer imports were injuring Whirlpool Corp., the petitioning company and primary domestic manufacturer.

The U.S. International Trade Commission recently initiated an investigation to monitor the impact of the tariffs. Specifically, the commission will seek to determine whether the tariffs have helped domestic washer manufacturers, such as Whirlpool, make a “positive adjustment to import competition.”

The trade commission will soon discover, however, that protectionist tariffs have not benefited industry giants like Whirlpool. In fact, the tariffs on washers, coupled with tariffs on steel and aluminum, have come at great costs for Whirlpool and its customers.

The Wall Street Journal reported in late January, “Whirlpool shares, down more than 30% over the past 12 months, fell 6.6% in after-hours trading.” The company “also posted its first annual loss since 2002.”

Moreover, the company’s fourth-quarter sales worldwide declined by 4.4 percent. Whirlpool and other washer manufacturers increased the price of their products by upwards of 20 percent in the second quarter of 2018 because of higher input costs and barriers on foreign competition.

That has prompted many American consumers to forgo the purchase of new appliances.

Marc Bitzer, chief executive officer of Whirlpool, acknowledged that “the net impact of all remedies and tariffs has turned into a headwind for us.”

Investors’ expectations were downgraded when taking into account the cost of the steel and aluminum tariffs, an issue stemming from the U.S.-China trade disputes.

Whirlpool “expects about $300 million more in expenses due to higher import duty on raw materials [such as steel] used in its appliances,” Reuters reported.

With higher costs and less demand for its products, Whirlpool has cut production, adversely affecting its employees. In fact, the company’s new $200 million factory in Clyde, Ohio, is not operating at full production capacity, and the factory’s employees are not working all available shifts.

Likewise, Whirlpool’s return on assets has been negative for the past three quarters. That means the company is doing a bad job at turning its resources and investments into profits—a sign that the company is not being operated efficiently.

Tariffs have clearly not made Whirlpool more resilient toward foreign competition and have actually been detrimental for its workers, customers, and the American economy.

The U.S. International Trade Commission should recommend that the washer tariffs be removed immediately, and the president also should eliminate the tariffs on steel and aluminum.