Trump’s Tariffs Will Hurt the Economy. Congress Should Reassert Its Constitutional Authority on Trade. 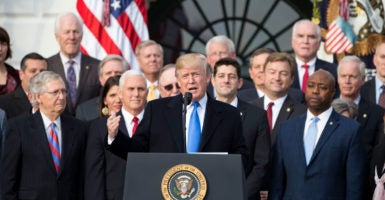 The Constitution gives Congress the power to regulate commerce, but significant pieces of that power have been outsourced to the executive branch over the last four decades.

One example of this outsourcing is Section 232 of the Trade Expansion Act of 1962. That provision gives the president the authority to impose import tariffs without the input of Congress. President Donald Trump is now using Section 232 to impose tariffs on steel and aluminum.

These new tariffs have shed light on the flaws of Section 232 and the plain lack of congressional oversight during the Commerce Department’s investigation into the impact of steel and aluminum imports.

Here are three of those flaws in Section 232:

1. It does not clearly define “national security.”

The lack of a definition or narrow parameters for what constitutes “national security” leaves the term up for interpretation by bureaucrats at the Commerce Department. The report recently released by Commerce went so far as to claim that “it appears likely that Congress recognized adverse impacts might be caused by imports from allies or other reliable sources.” That claim is vague at best, and baseless at worst.

2. It does not require a cost-benefit analysis of recommended trade restrictions.

In its report, the Commerce Department failed to address the potential negative consequences that its recommended tariffs and quotas would have on the entire U.S. economy. Imposing tariffs to protect one industry, or part of an industry, can harm other parts of the economy, and the Commerce Department should be forced to acknowledge those consequences in a Section 232 report to the president.

3. It does not require the Commerce Department to consult with or get approval from Congress if trade restrictions are recommended.

For the president to impose tariffs under Section 232, he is required to allow a period for public comments and inter-agency consultations. Congress, however, has no formal role in the process. Congress gave up too much authority in Section 232, and should work to regain a role in the tariff implementation process.

Given these shortcomings in the law, Congress should take this opportunity to reclaim and reassert its constitutional authority, both in Section 232 and in other laws that hand over trade authority to the executive branch.