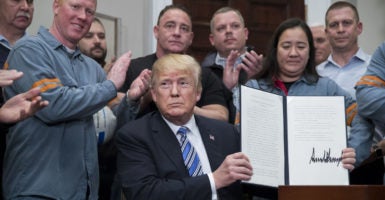 The Trump administration’s new tariffs on steel and aluminum from abroad could result in more than five jobs lost for every single job gained, according to an analysis from a group that advocates free trade.

The job losses will be direct and indirect, as price hikes will hit American companies that buy international steel to make screws, wires, and machines, Laura M. Baughman, president of the Trade Partnership, said Friday during a Heritage Foundation event.

“When I first heard about these tariffs and the president’s motivation for them, I really had to agree that I thought this was really a proposal of his that was coming from the heart,” Baughman said.

“I can imagine it must be really hard to travel around the Midwest and coal country and everywhere during the campaign and see so many communities that have been decimated and unemployed workers, and the hardship that they are going through,” she added.

The Trade Partnership uses the same economic model as the Commerce Department. However, Baughman said only the job gains were noted in the Commerce report.

The tariffs will increase U.S. employment for the iron and steel sector—mainly for aluminum, according to the Trade Partnership study.

However, the consumer price hikes and price increases for business will cost 179,334 American jobs for the rest of the economy.

There would be more than 36,000 American jobs lost in the manufacturing sectors, including a loss of more than 12,000 jobs for fabricated metals, more than 5,000 lost for motor vehicles and parts, and more than 2,100 in transportation equipment makers, according to the report.

The Trump administration and many labor unions contend that too many imports kill American jobs.

Baughman responds, cheap imported goods might cause job losses, but technology, consumer demand, and other economic changes are also responsible for unemployment in certain sectors.

“It’s so much easier, especially for politicians, to point to foreigners as the cause of all of our ills and therefore call import protections as the solution,” Baughman said. “Way more easier than it is to say, ‘Well, I’m going to take away your technology so that you can have your job again.’”

The tariffs Trump announced would have little impact on China or Russia, said Tori Whiting, a trade economist with The Heritage Foundation.

“The administration has said time and time again that China is the issue with steel, maybe Russia is the issue with steel,” Whiting said during the panel discussion Friday. “These tariffs will not do much, if anything, to impact our imports from China. Two percent of all U.S. steel imports come from China. That’s a statistic from 2016. That number has decreased significantly over the past five to six years because of anti-dumping and countervailing duties that have all but cut off a lot of imports of steel from China.”

Small business will be the hardest hit, said Vanessa P. Sciarra, a vice president with the National Foreign Trade Council.

“If you are a big company, say you are a big beverage manufacturer, you probably can jump and make other supply arrangements,” Sciarra said at the Heritage event.

“But if you are a small fabricator in Michigan or Ohio, and you use a foreign metal because it has been price attractive for you to do that or there has been some relationship you have with this supplier, those supply chains are going to be cut off by these increase tariffs,” she said. “You are going to have a hard time jumping to new sources of supply.”